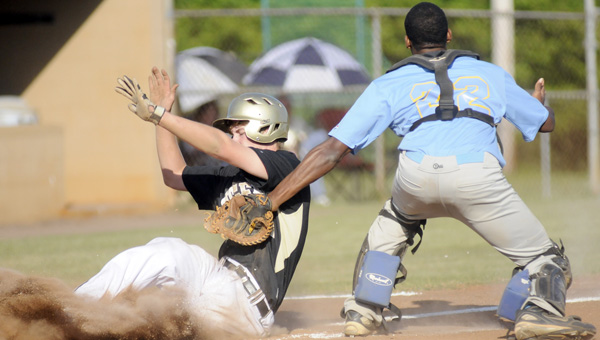 After jumping out to a 3-0 lead in the bottom of the first inning, the Tigers saw their lead slip away as the Saints pushed one run across in the second inning, two in the third and one more in the fourth inning to seize a 4-3 lead before the Tigers fifth-inning rally have them the lead for good.

“The way we responded in the fifth inning is how we have to play every inning,” Greenville head coach Richard Kelly said.

Jason Schofield led Greenville’s offensive charge with a 4-for-4 effort at the plate that included a double and three stolen bases.

With the win, the Tigers (9-15) finished as the runner up in Class 5A, Area 5, will face Chilton County High School (29-5) in the first round of the Alabama High School Athletic Association playoffs on Friday.

“We now must prepare for a week-by-week schedule,” Kelly said. “We know that Chilton County is a very good baseball team, but I feel like if we prepare the way we are supposed to, we will have a great chance to move on.”

Friday’s doubleheader is slated for a 5 p.m. Start in Clanton. The third game of the best-of-three series is scheduled for noon on Saturday if needed.