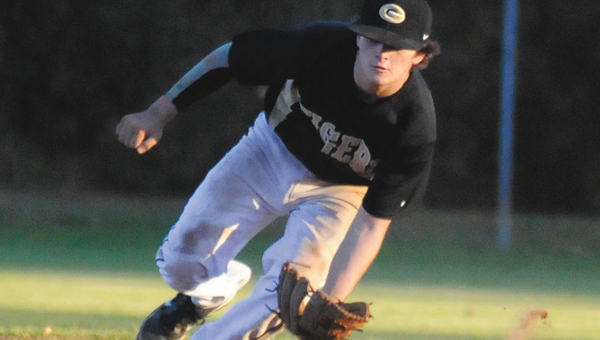 Greenville High School’s Harper Vinson had his fingerprints all over the Tigers’ 22-10 win against in-county rival McKenzie School on Tuesday in McKenzie.

The sophomore started the game on the mound, eventually earning the win after allowing two runs and recording four strikeouts in three innings of work before moving behind the plate to catch the final four innings.

At the plate all Vinson did was bang out four hits and steal seven bases to help power the Tigers’ offense.

“Harper had an outstanding game,” Greenville High School head coach Richard Kelly said. “I was very pleased with his hustle. He has come a long way in a short period of time with developing and manifesting a positive approach.”

On Tuesday, Greenville jumped out to a 7-1 lead after two innings before McKenzie rallied with five runs in the bottom of the third to cut the lead to a single run.

Greenville responded with five runs of its own in the top of the fourth inning to push its lead back to six runs. McKenzie never seriously threatened again as Greenville held on for its sixth straight win (7-10, 2-0 Class 5A, Region 3).

Greenville’s Nick Hartley was 3-for-5 with four stolen bases while Devonte Posey was 2-for-3 with a triple and three RBIs. Greenville’s Jerome Cook bashed a three-run home run in the seventh inning.

“We got a good win over a good McKenzie team,” Kelly said.

Greenville squared off with region-rival Demopolis on Friday. Results were not available at press time.