Grill serves up flavor of the coast 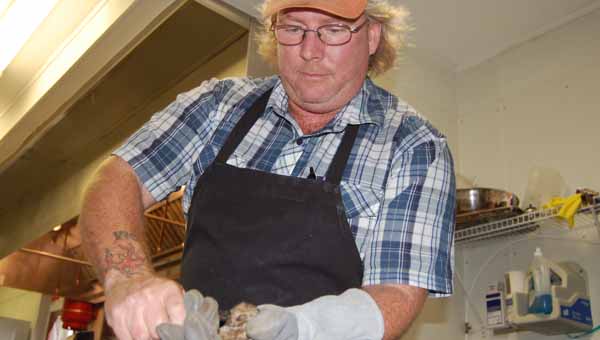 Shane Thomas, owner of The Lost Highway Grill, shucks an oyster on Thursday. The restaurant, which opened March 23, is located at 23 Jameson Lane in Greenville. Advocate Staff/Patty Vaughan

Shane Thomas has brought a little touch of Alabama’s coast to the City of Greenville with his new restaurant, The Lost Highway Grill.

Thomas originally chose Greenville as a home for his restaurant after traveling back and forth to visit family.

“Basically, my family is from this area, and we have always been back and forth for the last 20 years visiting,” Thomas said.  “One day, my wife and I decided to buy some property around here and we did as an investment.”

Thomas originally opened Vallartas Mexican Grill, but later decided that he didn’t want to compete with Old Mexico. Instead, he tried to find a new niche.

“When I first bought the Vallartas restaurant, I told the people at Old Mexico that I never wanted to be their competition, because they’re such a great restaurant here and a staple for Greenville,” Thomas said. “So we started looking at different avenues.”

With Thomas’ background of growing up on the coast and having a shrimper for a grandfather, he decided to bring what he knew to a restaurant setting.

“Basically, from growing up at home on the water, we tried to bring the same flavors and taste that we had down there and offer everybody here more fresh seafood variety,” Thomas said.

“(It was the) quietness of it and the hometown feel,” Thomas said. “Being from the coast, and I love it down there, but it’s lost the hometown feel it. It’s more touristy and this right here made you feel safer.”

Working in the commercial construction and development business, Thomas has had the view from the other side of the table often, eating out five and six nights a week while traveling.

“The coast is full of seafood restaurants and you learned what you liked and what you didn’t like,” Thomas said.  “What I have found out in the restaurant business is that your taste may not be somebody else’s. We tried to get a happy medium with that. It’s just a home-feeling restaurant with a good atmosphere and some good seafood.”