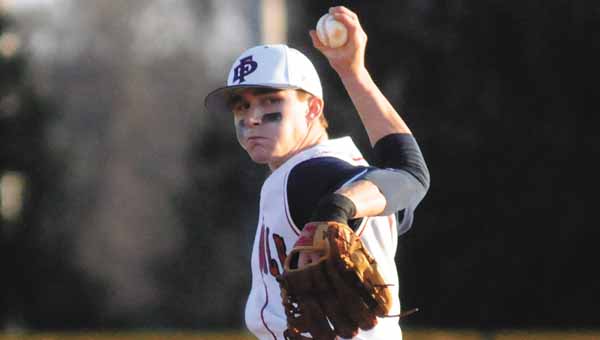 There are few things Skylar McKeown enjoys more than rearing back and throwing a baseball past a batter.

In fact, there may only be one thing.

That’s making a batter look silly by throwing a curve ball when the would-be hitter is expecting a fastball.

“I like the challenge of going head-to-head with the batter. It’s a great feeling when you throw one by a hitter.”

More times than not, the Fort Dale Academy senior comes out on top in the battle between pitcher and hitter. Just ask Crenshaw Christian Academy. In two meetings this year between the Eagles and the Cougars, the FDA ace recorded 32 strikeouts, including a 19-strikeout performance in the season opener. In the next meeting all McKeown did was no-hit the Cougars.

“He’s got a good arm,” Fort Dale head coach Josh Beverly said. “He’s hitting upper 80s with his fastball. He had a good year as a junior, and he’s gotten even better.”

Nearly a dozen junior colleges across the southeast made an effort to land McKeown on their squad. In the end he chose Central Alabama Community College in Alexander City.

“I really liked (Coach Wynn Fletcher), and I knew they had a good program,” McKeown said. “I felt like it would be the best fit for me.”

McKeown will join a pitching staff that’s help the Trojans to a 27-5 record so far this season. The right-hander will have the chance to compete for a spot in the Trojans’ rotation as soon as he steps on campus.

“I’m excited to get up there and start playing,” McKeown said. “I’ve always wanted to play college baseball.”

He’s hoping that Alexander City is just the first stop on the road to a professional baseball career that will hopefully take a detour through Tuscaloosa and the University of Alabama.

“I’ve always dreamed of playing at Alabama, but the ultimate goal is the Major Leagues,” he said.

If all goes as planned, maybe one day McKeown will have the chance to throw one by his idol, Texas Rangers outfielder Josh Hamilton.