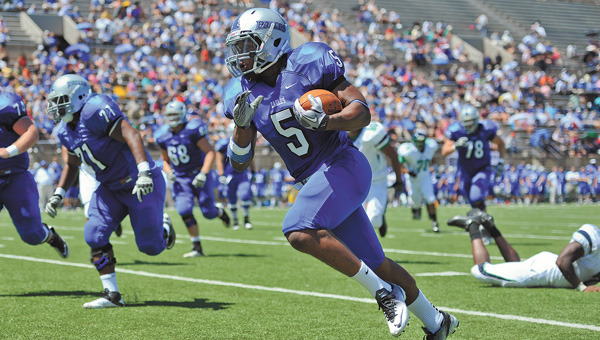 Like many freshmen, Brandon Cheatham packed on a few extra pounds during his first year at Faulkner University.

The added weight, which came as a result of lifting iron and not doughnuts and slices of pizza, led Faulkner coaches to move the one-time running back to linebacker after his redshirt season. That’s where the 6-foot, 210-pounder spent the 2008 season. Cheatham made the best of the change recording 29 tackles in nine games.

But deep down, Cheatham knew he was meant to run through, around and away from tacklers – not be one. So, he spoke with his coaches and convinced them to give him a shot at running back. They did, and the move paid off. In just three seasons, Cheatham became the Eagles all-time leading rusher with 1,610 yards in 29 games. He scored 16 touchdowns and averaged 4.6 yards per carry.

“I asked them to give me a chance to play running back again, and it worked out pretty well,” the 2007 graduate of Greenville High School said.

So well in fact, that the former Tiger was selected to play in the inaugural Hansen Bowl — an all-star game that featured the top players from NAIA and Division II and Division III schools.

“It was a great experience,” Cheatham said. “It was the first all-star game that I’d ever played in. It was a lot of fun to be around the different guys and share the weekend with them. I really enjoyed it.”

Now, Cheatham has his sites set on an even bigger stage.

“I’ve always dreamed of playing in the NFL,” he said.

Cheatham is working hard to make that dream a reality.

He recently took part in Alabama State University’s pro day working out for NFL scouts and has spent time lifting weights and working on improving his speed while still attending classes.

“It gets tough at times with school and all, but it’s my dream,” he said. “Football is my passion and I’ll do whatever it takes to get to the next level.”

If the past three years are any indication, Cheatham won’t let any obstacle stand in his way.