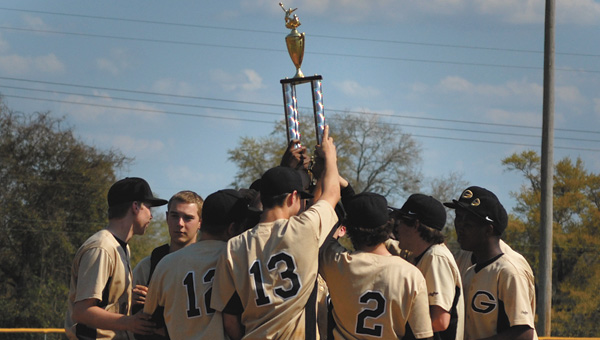 Greenville High School is on a roll.

After a sluggish start that led to a midseason coaching change, the Tigers have won five games in a row, including three in the inaugural Butler County Tournament to claim the title over in-county rivals Georgiana School and McKenzie School.

“I am very proud of our boys,” Greenville head coach Richard Kelly said. “This tournament was great for the county. Great baseball, with the support of fans, will continue to grow in Butler County with this tournament.”

Greenville (6-10) opened the tournament on Friday with an 11-1 win against Georgiana in a game that was shortened to five innings due to the mercy rule.

Colby Booker earned the win on the mound after tossing four innings and allowing just one run, while striking out four.

Jerome Cook, Michael Smith and Booker each had two hits in the win. Both Cook and Smith each stole two bases. Matt Sheffield led the Panthers with a 2-for-2 effort at the plate that included a run scored.

After McKenzie outlasted Georgiana in a game that lasted four hours, Greenville defeated McKenzie 14-2 in another five-inning contest.

Harper Vinson earned the win for Greenville after tossing 3 and 2/3 innings. Brandon Smith powered the Greenville offense with a 2-for-4 performance that included three RBIs. Cook was 2-for-3 and Smith belted a triple.

On Saturday, Georgiana rebounded to defeat McKenzie 20-7. Mike Dunn sparked the Panthers’ offensive attack with four RBIs. Sheffield was 3-for-4 with two RBIs and Derrick Blackburn was 3-for-5 with an RBI.

“It was a great time to get the kids some experience in a tournament atmosphere,” McKenzie head coach Tony Norris said. “We didn’t get the job done on the mound in any of the three games. We had spots of good things but as a whole we just gave our opponents too many opportunities.”

The Panthers’ win earned them a trip to championship game to face Greenville. But like the first meeting, the Tigers proved too tough to tame as they went on to a 13-0 win in five innings. Cook once again led the Tiger attack with a 4-for-4 performance at the plate. He drove in four runs and was also credited with the win on the mound.

“We played a very sound weekend of baseball,” Kelly said. “We are eliminating missed signs, and making things happen with our called plays. As soon as we expand our knowledge of the game of baseball, we are going to be where I want this team to be.”