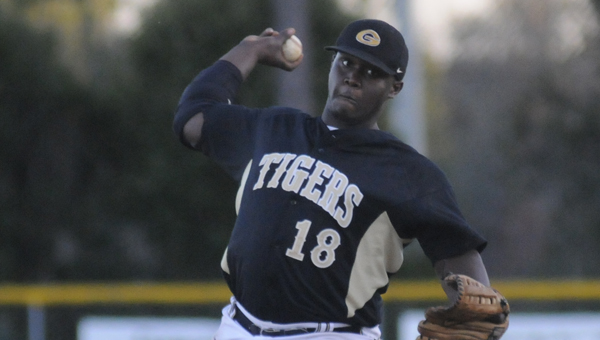 Greenville High School’s Colby Booker knocked in three runs to help power the Tigers to a 13-0 win against Wilcox-Central High School Tuesday night in a Class 5A, Area 5 showdown.

Right-hander Ozell Carter earned the win on the mound. He tossed three innings and struck out three in the contest, which was shortened due to the mercy rule.

“I was excited to this team have fun playing the game,” Greenville head coach Richard Kelly said. “They bounced around the entire time, and we executed plays very well against Wilcox. These boys want to learn the game, and have picked up on the mental side of the game very quickly. I am excited about Greenville baseball.”

The win came in Kelly’s first game at the helm of the program. He took over as head coach for Evan Kelley, who was relieved of his coaching duties on March 6.

The Tigers repeated the feat Thursday, downing the Jaguars 18-0 to earn back-to-back wins for the first time this season.

Smith was 3-for-4 with two doubles, three runs scored and an RBI to pace the Greenville offense.

Jason Scofield was also 3-for-4. He drove in four runs.

Cook was credited with the win on the mound after tossing three innings and recording five strikeouts in the mercy-rule shortened game.

“I thought that we played sound defense,” Kelly said. “We still have some areas and situations to cover in practice, but I was proud of our effort tonight.”

The Tigers will be back in action today when they play host to Georgiana School and McKenzie School in the Butler County Baseball Tournament. Games start at 11 a.m. at Beeland Park.