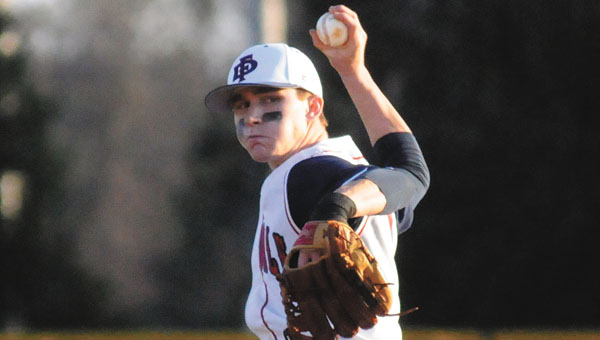 FDA’s Skylar McKeown tossed a no-hitter and helped lead the Eagles to a 4-0 win against Crenshaw Christian on Friday. Advocate Staff/Andy Brown

The performance came just nine days after McKeown struck out 19 Crenshaw Christian batters in a 4-2 win.

Cade Tillery and Brandon Matthews made sure McKeown had all the run support he needed. Tillery was 2-for-2 with an RBI, while Matthews went 2-for-3 at the plate and drove in a run.

“We’re still not hitting the way we would like to,” Beverly said.

With the win, the Eagles advanced to a showdown with Lowndes Academy on Friday afternoon.

The teams battled to a 3-3 tie before rain forced tournament officials to call the game in the eighth inning.

Tillery tossed all eight innings for the Eagles and struck out 12.

James Burkett pounded out two hits for Fort Dale, while Dylan Jones turned in a 1-for-2 performance at the plate and drove in a run.

The game will not be completed, according to Beverly.

Fort Dale played Escambia Academy in Atmore on Tuesday. Results were not available at press time.