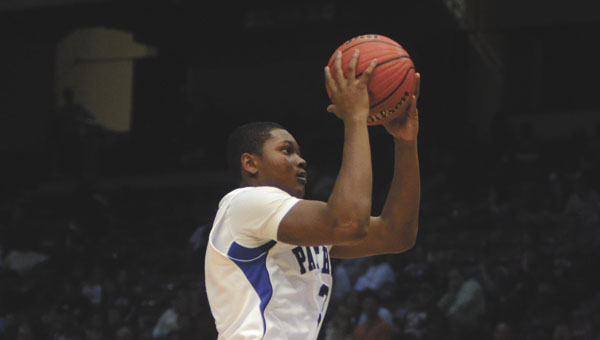 Georgiana School’s Adrian Rich led the Panthers with a double-double, 15 points and 13 rebounds, in a 53-48 loss to Pickens County High School in the Final Four. (Advocate Staff/Michael Rodgers)

BIRMINGHAM — Several times, the Georgiana Panthers had defending state champion Pickens County on the ropes but couldn’t deliver the knockout punch in the Class 1A Final Four in Birmingham.

With the game tied at 48 and under 30 seconds to play, an old-fashioned 3-pointer by Pickens County and a turnover by Georgiana set the stage for a 53-48 Tornadoes’ win.

After leading 30-27 at halftime, the Panthers fell behind in the second half.

The teams traded baskets, with Rickey Everett grabbing a rebound and scoring on a layup with just over a minute to play to keep the margin at one point.

Two free throws from Rich with 30 seconds to play tied the game, but a foul by the Panthers put Pickens County’s De’Marko Hall on the line after making a layup.

Hall hit the free throw to put the Tornadoes up by three, and a Georgiana turnover sealed the game.

Throughout the second half, making key plays was something the Panthers struggled with.

Georgiana was 10-for-19 from the field in the first half, but that dropped to 7-for-29 in the second half.

“Missed field goals and layups cost us the game,” Norris said. “We’ve had a few quarters this year where we struggled on offense, and unfortunately we had one of those tonight.

“It was a new situation, and usually the team steps up to what’s in front of them,” he continued.

“If we make a couple of shots, it’s a different game.”

Despite struggling from the field, the Panthers stayed in the game by out-rebounding Pickens County 43-28.

Fourteen of those rebounds came on the offensive end, and the Panthers got 13 second-chance points.

Norris also said his team’s defense was a key factor.

“That’s some of the best defense we’ve played all year,” he said. “I definitely think we came out and surprised them.”

Rich led the Panthers with a double-double, 15 points and 13 rebounds.

The loss ends Georgiana’s season with a 24-8 record, and Norris said that this team and its seniors have left its mark on the program.

“We had a great run this year, going to the Final Four for the first time,” he said.

“These seniors have left their legacy.  I’m extremely proud of this group of young men that have committed themselves to this program and worked hard to get this far.

“They’ve taken this program to a new level, and I can’t thank them enough for their hard work. They never quit when things got hard or when they were down — they pushed through and stayed together.”