FDA to play on new field 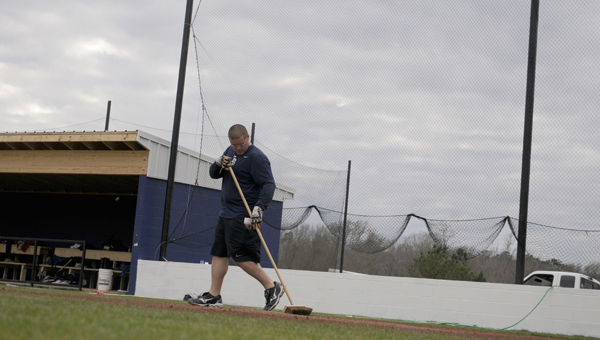 Fort Dale Academy assistant baseball coach Will Bowman prepares the field for practice on Monday afternoon. FDA will play its first game ever on its new on-campus facility Friday when it takes on Crenshaw Christian Academy at 9 a.m. in the Quality Co-Op FDA Baseball Tournament. Advocate Staff/Andy Brown

If you build it, he will come.”

That sentence was whispered to Ray Kinsella a number of times in the 1989 hit movie “Field of Dreams.” Kinsella, played by Kevin Costner, heard the message loud and clear. He plowed down his cornfield and built a baseball diamond.  “Shoeless” Joe Jackson, along with a host of other former professional baseball players, then appeared to play ball on the newly made diamond.

There was no corn plowed down and Jackson won’t be showing up in Greenville anytime soon, but plenty of other baseball players will be.

On Friday, Fort Dale Academy will play its first game at its newly built field of dreams when it plays host to Lowndes Academy, Evangel Christian Academy and Crenshaw Christian Academy in the Quality Co-Op FDA Baseball Tournament.

“We’re excited,” Fort Dale head coach Josh Beverly said. “It means a lot to us to have our own field, and it’s going to be special to play that first game at our own on-campus baseball facility.”

Fort Dale previously played its games at the City of Greenville’s Beeland Park, where it shared a field with Greenville High School.

“The city was very gracious in letting us use their field, but it’s great to finally have our own ballpark,” Beverly said. “We can take care of it and take pride in it, and we’ll know everything there is to know about it.”

Along with constructing a new baseball field, Fort Dale also built a softball field. The project cost between $75,000 and $100,000, excluding the price of the land, which the school purchased several years prior to beginning construction on the fields. Fort Dale headmaster David Brantley said much of that cost has been offset by donations. He estimates the value of the fields when the project is completed to be in the neighborhood of $150,000 to $200,000.

“We’ve had small donations and sizeable donations from people that have helped us get to this point,” Brantley said. “There has been a lot work donated, including site work from individuals that we want to thank at the appropriate time.”

The new facility will feature a concession stand, restrooms and press box for both the baseball and softball fields.

The Fort Dale softball team will play its first game on its new field Thursday when it takes on Lowndes Academy at 3 p.m.