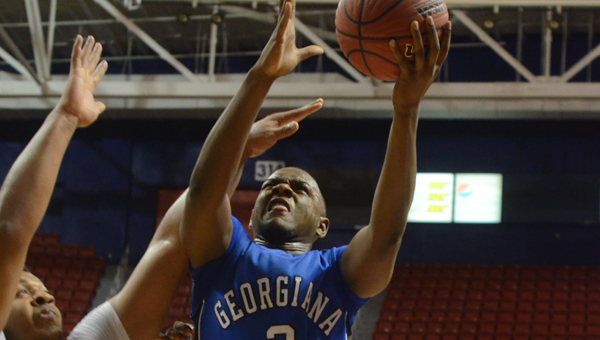 Georgiana School’s Rodney Cheatham drives to the basket during the Panthers’ 70-58 win over McIntosh High School Friday in the finals of the South Region Tournament in Mobile. Advocate Staff/Michael Rodgers

MOBILE — After exorcising the McIntosh Demons, the Georgiana Panthers are bound for Birmingham and the Final Four.

The Panthers led McIntosh 48-43 after three quarters, and a combination of strong free throw shooting and smart decisions earned Georgiana a 70-58 win in the finals of the South Region Tournament.

“I’ve had these kids for five years now, and they’re a resilient bunch,” said head coach Kirk Norris. “When the game got tight, I trusted them to make good decisions.”

Norris said he knew from watching tape that McIntosh was an athletic team that liked to press on the defensive end.

“After I saw how we played defense on them in the first quarter, I knew we had a chance to beat them,” he said.

The Panthers pulled ahead early, but McIntosh fought back to cut the lead to 13-11 after the first quarter.

The second quarter was close, with Georgiana holding a 29-25 lead at halftime.

Many of Georgiana’s points came in transition after breaking McIntosh’s full-court press.

“We’re a pressing team too,” Norris said. “We’ve pressed all year, and we work on it every day.  Our players see it in practice.”

Norris said he only employed the press a few times during the game in order to help keep his team’s legs fresh. Defensively, the Panthers held McIntosh to 2-for-11 on 3-pointers in the second half.

Midway through the fourth quarter, Georgiana pulled out to a 10-point lead, but the game was far from over. With under a minute to play, McIntosh cut the lead to 63-57, but two free throws from Binion helped extend the lead.

With 19.5 seconds to play, two more free throws from Adrian Rich pushed the lead to 68-58 and chants of “Birmingham” started going up from the Georgiana fans.

Rickey Everett pulled in nine rebounds, while both Rich and Justin Oikle had six boards.

“For my senior year, I just didn’t want it to end so soon,” Binion said. “I wanted to play hard and help my teammates out.”

Cheatham, Rich, Curry and Binion were named to the All-Region team.

The Panthers will play the winner of the Northwest Regional at BJCC Arena in Birmingham at 1:30 p.m. Tuesday.