Panthers move on to regional finals 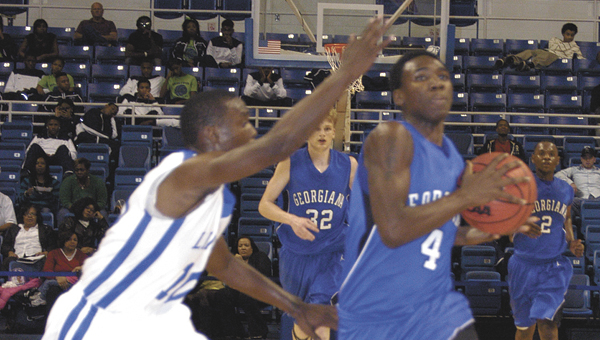 MOBILE — Georgiana School turned to Keon Binion in the crucial moments of its South Region semifinal with Linden High School Tuesday and allowed the senior to lead it to a 60-56 win.

“This is our first time being here,” an excited Binion said following the game. “We’re going to keep playing hard and keep going forward.”

Wilvonta Horton threw down a breakaway, two-handed slam with 2:08 to play that brought the Patriots to within three at 54-51 and capped a personal 6-0 run of his own.

With 48 seconds left on the clock, Kynard Craig came up with a ball that had been liberated by the Linden press defense and guided it through the hoop to cut the score to 56-53.

Linden then twice came up with the stop it needed as it forced a pair of Georgiana misses at the other end before Binion elevated above the Patriot defenders to tip the ball in and put Georgiana up 58-53.

The possession was a microcosm of Linden’s afternoon as the Panthers relentlessly pounded the boards, finishing the game with a 32-22 rebounding advantage.

Still, Linden continued to battle as Shauka Reese buried a three-pointer on the ensuing possession to bring the Patriots to within two at 58-56 with only 20.1 seconds remaining.

Linden’s best opportunity at completing the comeback passed narrowly over the fingers of Anthony Robinson as the Georgiana inbound pass found its way into the waiting hands of Lee Curry, who converted the opportunity at the other end to ice the game for Georgiana despite a 21-13 fourth-period advantage for Linden.

The Panthers led by as many as 10 in the first half and left themselves with a 34-25 halftime lead when Binion drained a 3-pointer at the halftime buzzer.

Prior to the fourth period, Linden proved unable of assembling any sustainable run, finding itself continually stifled by the Panther defense.

“We kind of pride ourselves on great defense,” Georgiana head coach Kirk Norris said. “We knew coming in who their best players were. We put our two best defenders on them and tried to make somebody else beat us.”

Curry led all scorers with 17 points. Binion added 14 for Georgiana. Adrian Rich had 10.

Georgiana will play McIntosh in the South Region final Friday at 11:45 a.m.