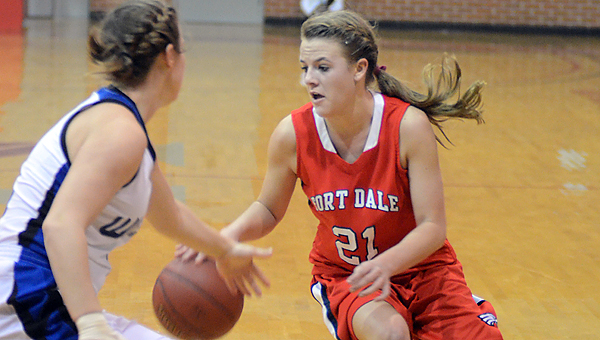 Despite a strong second half, a slow first half for Fort Dale Academy set the tone for a 44-37 loss to Wilcox Academy in the Elite Eight at Huntingdon College.

The Eagles trailed 9-3 after the first quarter, and Wilcox stretched the lead to 23-9 at halftime.

“We struggled to score in the first half,” said Fort Dale head coach Reggie Mantooth. “We played better in the second half, but we were just too far behind.”

Down 28-13, FDA went on a 5-0 run with three minutes to play in the third quarter. Several times in the quarter, Anne Matthews converted an old-fashioned three-point play and helped cut the lead to 32-24 after three quarters.

Barrett Leverette hit a three-pointer a minute and a half into the fourth quarter to cut the lead to five points at 32-27, but it was the closest the Eagles would get. Despite strong free throw shooting, the Fort Dale couldn’t come up with a stop on the defensive end and Wilcox closed out the 44-37 win.

Matthews was the leading scorer for FDA with 20 points, including 10-10 from the free throw line. “I told them in the locker room that I thought we improved throughout the season,” Mantooth said. “We’ve got a young team and hopefully that will motivate us for next year.”