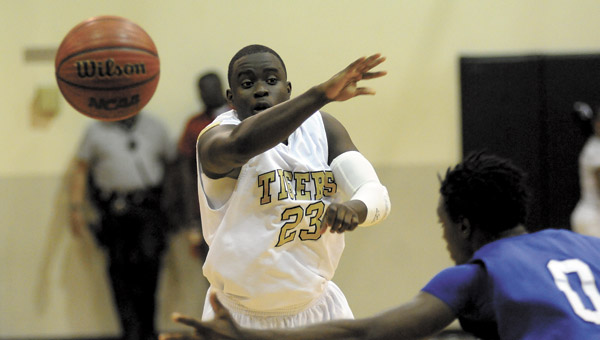 Greenville High School guard Brian Smith fires a no look pass during a game with Georgiana School on Friday. Smith and the Tigers had their two-game winning streak snapped with a 45-40 loss on Monday to Booker T. Washington High School. (Advocate Staff/Andy Brown)

The Tigers (4-16) had won back-to-back games after snapping an eight-game skid before Monday night’s loss.

“BTW is a very athletic and talented team, but we had every opportunity to take the game away,” Greenville head coach Richard Kelly said.

After a sluggish start that saw the Tigers fall behind by nine, Greenville clawed its way back into the contest in the second half. After trimming the lead to seven points, Greenville’s Kent Riley opened the fourth period by scoring two quick baskets to help the Tigers draw to within three points at 30-27.

Momentum swung in Greenville’s favor. The Tigers’ Javarrius Cheatham scored a basket to knot the game at 40-all with 1:30 left to play in the contest.

But a third win in a row proved to be just out of reach for the Tigers, who failed to score during the final 1:30 of the period. The Tigers were forced to foul to extend the game, and the Eagles took advantage sealing the win at the free-throw line.

“All we want is a chance to win the game late,” Kelly said. “We got that opportunity, but couldn’t capitalize.”

Greenville will be back in action Friday when it takes on Wilcox-Central in the first round of the area tournament. The game is scheduled to begin at 7:30 p.m. in Camden.