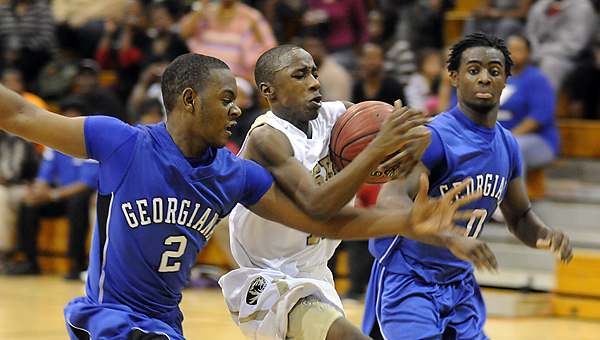 Greenville's Debryant Crenshaw is fouled by Georgiana's Rodney Cheatham (2) while driving to the basket during the Tigers' 50-47 win Friday night. Crenshaw scored seven points in the victory. (Advocate Staff/Andy Brown)

The Class 1A Panthers dominated the first half and looked to be on their way to a second win of the season against the Class 5A Tigers before a second-half rally sparked Greenville to a 50-47 win.

“We started slow,” Greenville head coach Richard Kelly said. “I challenged our team at halftime to protect our floor, and they did that.”

For the Panthers, the game’s opening 16 minutes couldn’t have gone much better. With the game tied at 6, Georgiana  (19-6) went on a 17-0 run during an eight-minute stretch to storm out to a 23-6 lead and then carried a 10-point advantage into the break.

The second half was a different story. The Tigers (3-15) opened the third period with a 5-0 run to trim the lead to five points. With 40 seconds to play in the third, Greenville’s Donte’ Lee knocked down a 3-pointer from the wing to cut the Panthers’ lead to just two points at 36-34. Greenville’s Debryant Crenshaw then knotted the game at 36-all by spinning past a Georgiana defender and knocking down a short jump shot in the lane.

The game’s final stanza was a seesaw battle that featured five lead changes and a tie. Marvin Davidson gave Greenville the lead for good with 54 seconds left to play when he tipped in a missed shot to put the Tigers ahead 48-47. Greenville’s Kent Riley then sank a pair of free throws with four seconds remaining to seal the win.

“We made really good decisions and that was the key,” Kelly said. “At the end, when we had to make free throws, and when we had to take care of the ball and run our offense and take time off the clock, we did that. We have preached  to finish all year long. I am just ecstatic that these boys came through early adversity and finished.”