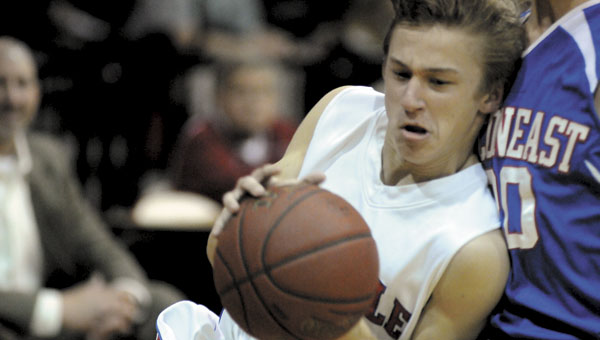 Fort Dale Academy's Chip Taylor drives to the basket during the first half of the Eagles' 49-42 loss to Macon-East Montgomery Academy Wednesday night in the first round of the Class AAA, Region 1 tournament at Huntingdon College. Taylor finished with five points. (Advocate Staff/Andy Brown)

Fort Dale Academy was hoping the third time would be the charm.

For the third time this season, No. 3 Macon-East Montgomery Academy defeated the Eagles. The latest, a 49-42 loss Wednesday night in the first round of the Class AAA, Region 1 tournament at Huntingdon College, ended the eighth-ranked Eagles’ season.

While the season ended in disappointing fashion, Fort Dale head coach Reggie Mantooth said he was pleased with his team’s performance.

“I am very proud of our guys’ performance and of what they accomplished this year,” he said. “We lost four starters from last year, and had a great group of guys that really worked hard and did things the right way.  As a coach you always think about things you could have done different, but we gave it our best effort and we will live with the results.”

The Eagles (17-7), who lost their first two games with the Knights by a combined 36 points, had Macon-East on the ropes early Wednesday night. After falling behind 12-9, Fort Dale stormed back to take a 19-18 lead into the intermission thanks in large part to a stingy half-court defense.

“We guarded them pretty well in the half court,” Mantooth said. “We tried to slow the tempo down and take our time on offense. We didn’t want to get in a transition game with them. We didn’t really do much different (than we did in our first two meetings). We just knew their personnel and what it would take to win.”

In the third period, the Knights cranked up their full-court pressure, forcing the Eagles into a string of turnovers en route to recapturing the lead. At the close of the period the Knights led 35-32.

“We made a couple of bad turnovers in the second half that led to some easy points for them,” Mantooth said. “We actually ran our offense pretty well. We just had some turnovers at bad times.”

In the game’s final period, the Knights outpaced the Eagles 14-10 to seal the win.

“I wasn’t ready for the season to end because of our players,” Mantooth said.  “Our four seniors – Cam Norman, Matt Langford, Tyler Millo, and Ethan Gregory – have been a tremendous example of what can be achieved with hard work and dedication. They helped us win 17 games this year through their leadership, attitude, and class in doing things the right way. They have really stood for everything we try to teach at Fort Dale.”

Norman, who fouled out with 1:42 remaining to play, led the Eagles with 13 points. Norman was 3-for-7 from beyond the arc and 5-for-13 from the field.