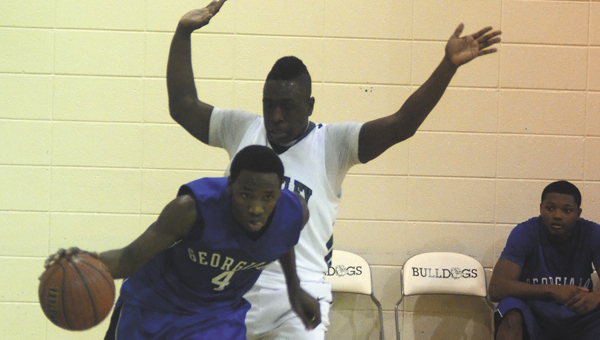 Despite jumping out to an early lead against Brantley, the Georgiana Panthers were unable to hold the Bulldogs at bay and fell 49-43.

The Panthers exploded for 16 points in the second quarter, including a 6-0 run to end the half, and built at 24-16 lead at the break.

However, the second half was a different story.

Brantley came out and put 16 points on the board while Georgiana went cold and only scored four points, all of which came on free throws.

It looked as though Brantley would run away with the game, but Rickey Everett and Adrian Rich both came alive in the fourth quarter.

The Panthers cut the lead from nearly 10 to a point with 2:30 to play in the game.

From there, the game was neck and neck until Brantley’s O.J. Guice put an exclamation point on the game with a slam dunk with 10 seconds to play.

“We couldn’t score,” said Georgiana head coach Kirk Norris. “We had several players that got in foul trouble, and we struggled on offense with them out.  We also couldn’t get any calls to go our way, and we didn’t play with any rhythm.”

Lee Curry was the leading scorer for Georgiana with 11 points, while Rich had 10 points and both Everett and Trey Brockman scored eight.

The Panthers were tied with J.F. Shields in area play, but the loss to Brantley drops Georgiana to second in the region.

Georgiana will face Brantley in a rematch in the opening round of the area tournament, which will be held at J.F. Shields.