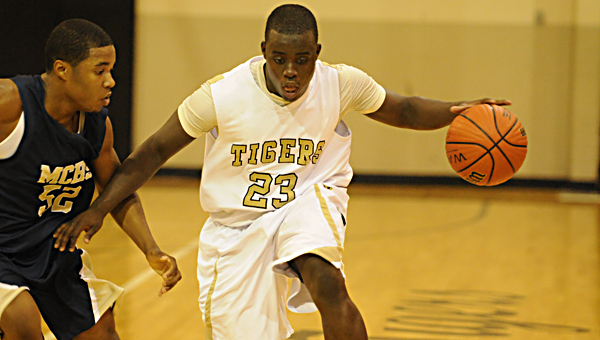 “Selma made big shots in the fourth period and we turned the ball over,” Greenville High School head coach Richard Kelly said.

After the opening period of play, the Saints held a 13-8 lead. The Tigers sliced away at the Selma advantage in the second period and entered the intermission trailing by just two points at 19-17.

“We had many opportunities to take a big halftime lead,” Kelly said. “We missed a few lay-ups late in the second period, but going in the half down by two against a team like Selma was very encouraging. Our defense was outstanding in the first half and we controlled the boards and forced quick shots.”

The Tigers comeback wasn’t meant to be however. The Saints stretched the lead back to seven by the end of the third period and pushed the lead to 13 to close the game thanks to an 18-12 advantage in the final stanza.

“If we keep playing hard like we did tonight then we will be fine,” Kelly said. “We are so young, and this group is a lot of fun to coach. I feel like our kids are buying into how much we’ve improved, and how we are looking forward to the rest of the season and the area tournament. Hopefully we will be playing our best then.”

Greenville will be back in action Saturday when it plays host to Monroe County. B-Team action starts at 1 p.m. with varsity action set to follow.