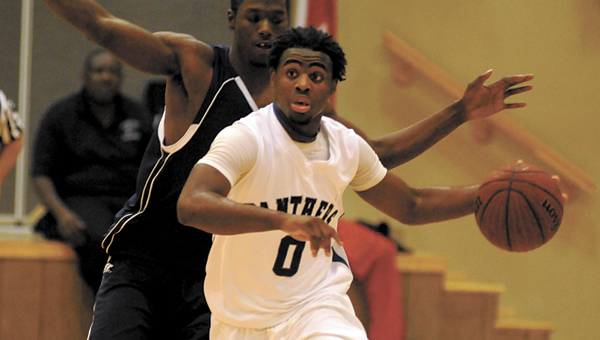 Georgiana School got two quick points to open its contest with in-county rival McKenzie School Tuesday night. As in two points before a second had even ticked off the clock.

From there, the Panthers rolled to a 63-31 win against the Tigers.

The opening points came courtesy of a technical foul issued to McKenzie after one of its players dunked during warm-ups.

“I thought we played well as a team,” Georgiana head coach Kirk Norris said. “We were able to mix up our lineup and work on some things we have been working on recently in practice. We still aren’t as consistent on offense as we need to be though.”

On Tuesday night, the Panthers’ offense was good enough.

Georgiana raced out to a 16-5 lead by the end of the opening stanza, and then extended its lead to 35-15 by the close of the first half. That allowed Norris to give his bench considerable minutes in the second half.

“I think (being able to play our subs) will be a tremendous help to us as we approach the postseason,” Norris said. “Anytime you get good minutes from your bench, you have a chance to be successful and keep your first group’s legs fresh.”

The Panthers (18-4, 4-1) outpaced the Tigers 11-4 in the opening five minutes of the third period and led 46-19 heading into the game’s final period during which they outscored McKenzie 9-5 to close out the win.

McKenzie managed just two field goals in the first period, the last coming with just 10 seconds remaining to play in the stanza. Aside from a 10-point second period, the Panthers held the Tigers to single digits in each of the game’s periods.

“Defense is what we have to pride ourselves on,” Norris said. “I always tell our guys that you will have off nights offensively when your shots are not falling, but you can play good defense and give great effort on that end every night.”

Georgiana will hit the road to face Brantley Friday night. B-Team action will begin at 4:30 p.m. with varsity action slated to follow.

McKenzie will travel to Highland Home on Tuesday. Action is slated to begin at 4:30 p.m.