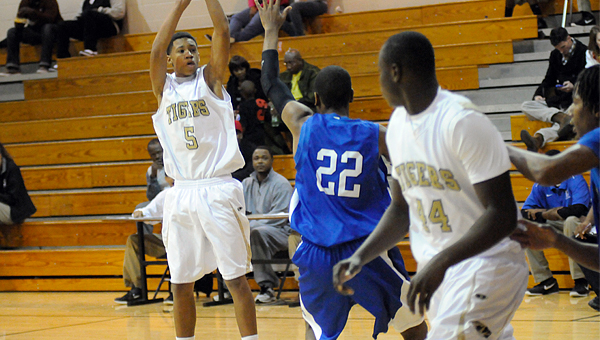 Senior Desmond Fegan takes a shot in a previous game in the season while sophomore Marvin Davidson looks for a rebound. Advocate Staff/Patty Vaughan

Head coach Richard Kelly said his team played well during the first and fourth periods but was unable to put up points through the second and third period.

“We started playing really well in the first and fourth quarter,” Kelly said. “This is where our youth caught up with us. We turned over the ball too many times. We moved the ball well but we couldn’t finish on the inside. We’re young.  We’re learning day by day.”

Wilcox was able to put up the points, and Kelly was proud of his team for playing well against the number one team in the region.

“We’ll play Wilcox in about three weeks,” Kelly said. “Third time is a charm as they say.”

Kelly said the team needs to improve on rebounds, on free throws and defense.

Greenville will face Georgiana on Saturday, and Kelly said his team is ready to take on another challenge.

“We have Georgiana tomorrow and we have to be back quickly,” Kelly said. “It’s different than football. They’re a good team. They fell out of the ranks but they’re still a good team. We just have to keep working and we will continue to get better.”