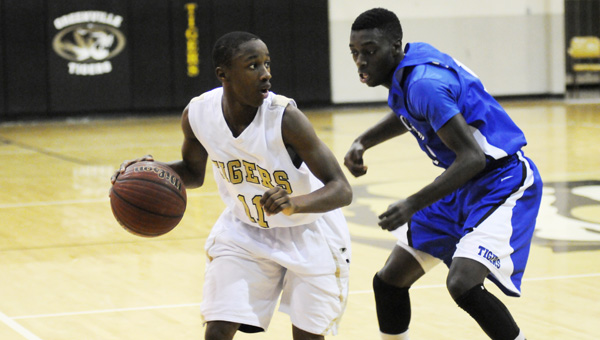 Freshman Debryant Crenshaw looks to make a pass to a teammate against Demopolis. Advocate Staff/Patty Vaughan

It was a defensive struggle until the very end when Demopolis pulled away with a 66-51 victory over the Tigers.

After being tied at nine at the end of the first period, Demopolis was able to take a small lead going into the half 23-19.

Greenville came out for a strong second half, scoring 20 points in the third quarter led by sophomore Marvin Davidson with seven points and freshman Javarius Chetham with six.

However, Greenville trailed 39-41 at the end of the third and was never able to recover a secure lead.

With four minutes left in the game, Demopolis was able to run down the clock and outscore Greenville by 10 points after Greenville’s freshman Debryant Crenshaw gave a last ditch effort.

Junior Kent Riley was the top scorer for Greenville with 14 points with junior Nick Roper not far behind with 12. Marvin Davidson scored 10 points for the night.