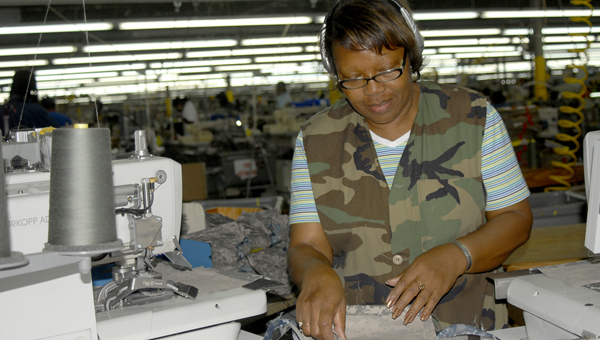 American Apparel, Inc. announced Monday that it is closing its Fort Deposit plant.

The plant’s closing means a loss of 175 jobs.

“Closing this plant is going to be a tremendous hurt to the town of Fort Deposit,” Mayor Fletcher Fountain said. According to the company, the Fort Deposit location will be consolidated with its Selma plant. The reason given was “a reduction in opportunities in the military market.”

The company reported Fort Deposit employees would be offered the opportunity to transfer to Selma after the closing, which is slated to be completed by May 31.

“Well, I think it’s bad that at this particular time with the economy the way it is that we stand a chance to lose another 175 jobs, ” said Lowndes County Commission Chairman Charlie King Jr. “Our present unemployment rate is already 14.6 percent and that’s going to put us in the 20 percent unemployment rate.
“I feel sorry for the people that its affected, and the County Commission is working diligently as we speak to continue to try to get industry located here in the county so the people can get jobs and meet the needs and live a quality, a normal life like everybody else.”

Fountain said the closing also delivers a blow to the town as a whole.

While Fountain said the 175 people to be impacted didn’t all live in Fort Deposit, it would affect the ones that did.

“If they continue with the plant, they’re going to have to travel to Selma. And then if they don’t continue with it, they will be out of a job,” he said. “We’re going to miss those dollars that (the employees that did not live in town) were spending with us in Fort Deposit. So, it’s going to affect us quite a bit.”

“We haven’t rebound yet from Bill’s Dollar Store, nor the grocery store that we lost. In fact we don’t even have a grocery store here and that’s hurting us.”

The mayor spoke of efforts to get sewer extended to the interstate saying, “We’re not going to get any businesses until we get out there and fill up that interstate, that corridor out there, so businesses can come in there and work their way toward town.”