FDA moves into tie for first in area 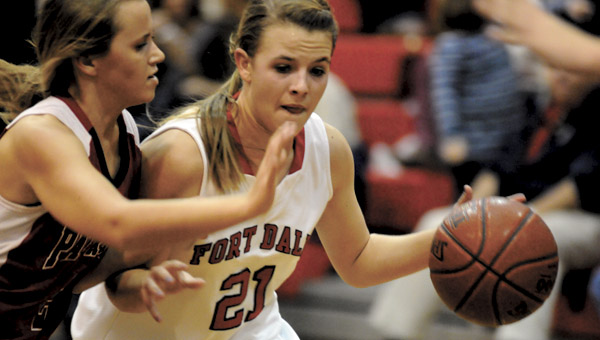 The win moved the Lady Eagles into a tie with the Lady Colts and Pike Liberal Arts School for first place in Class AAA, Region 1, Area 2.

Fort Dale head coach Reggie Mantooth said that while his team didn’t play particularly well, he was proud of the effort.

“I thought we played hard,” Mantooth said.  “Our plan was to press them and turn them over, and we did a good job of that.  Hopefully it will help our confidence to know that we got a win and didn’t play very well offensively.”

Fort Dale (7-9, 3-1) forced Hooper into 34 turnovers, which helped the Lady Eagles carry a 12-point lead into the final period of play despite shooting just 29.5 percent from the field and failing to make a single 3-point basket.

Leverette led the Lady Eagles with a 6-for-11 performance from the field in 30 minutes of play.

“Barrett had a good game for us and has been playing well,” Mantooth said. “She is our only senior and really needs to be a leader on the court for our team. I think our team has a lot of confidence in her.”

Matthews did her damage from the free-throw line where she connected on 14-of-24 attempts. She was just 1-for-7 from the field.

Fort Dale will be back in action Friday when it hits the road for a showdown with No. 2 Macon-East Academy.

The Lady Eagles defeated the Lady Knights 39-33 in the teams’ first meeting of the season on Dec. 6.