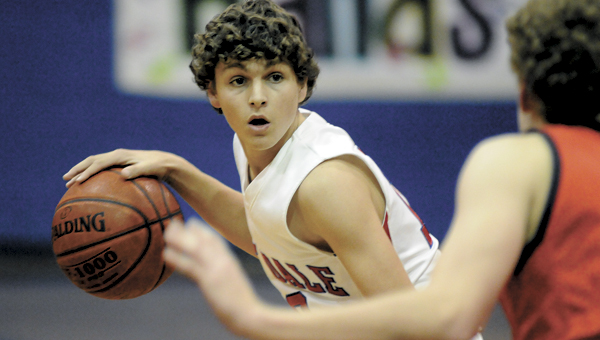 Norman, one of four Eagles to tally double figures, shot 60 percent from the field (6-for-10) and beyond the 3-point arc (3-for-5). He also recorded three steals and snagged four rebounds.

Wesley Scott, who scored 14 points in the win, also turned in a strong shooting performance for the Eagles (12-3, 3-0). Like Norman, Scott connected on 60 percent of his attempts from the field (6-for-10).

“I thought Cam and Wesley both shot the ball well and hit some key shots for us,” Fort Dale head coach Reggie Mantooth said. “I think both of them are starting to be more confident in their offensive ability.”

“We played a very good offensive game,” Mantooth said. “We shot it well from 3-point range early in the game and that made Springwood have to change from playing zone to man-to-man against us.”

Fort Dale jumped out an early lead outpacing the Wildcats 21-12 in the first period and then extending its lead to 36-23 at the break. The early advantage allowed the Eagles to dictate the game’s tempo.

“It is always good to get off to a fast start,” Mantooth said. “We want to try and control the tempo throughout the game, so it is a huge advantage when we get off to a good start.”

Springwood outscored Fort Dale 21-16 in the third period to slice into the Eagles’ lead, but an 18-16 advantage in the game’s final period helped the Eagles hang on for the win.

Millo scored 16 for Fort Dale in the win, while Chip Taylor added 14 points and 10 rebounds.