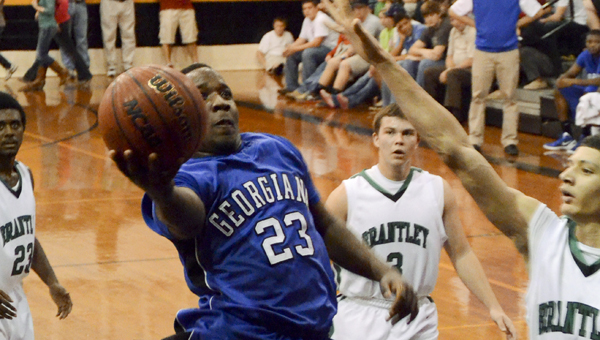 Georgiana's Carlo Mitchell drives for a layup against the Bulldogs. (Advocate Staff/Michael Rodgers)

Georgiana held off region rival Brantley 56-49 to earn a spot in the championship game of the Red Level Christmas Tournament.

Georgiana held the lead for practically the entire game, but Brantley got within a point several times.

“Brantley can score from anywhere,” Georgiana head coach Kirk Norris said. “No matter how big the lead, they can cut it.”

The Panthers led 17-14 at the end of the first quarter, and despite pulling ahead with hot three-point shooting from Keon Binion, the Bulldogs held the score to 30-25 at halftime.

Adrian Rich scored seven points for Georgiana in the third quarter, but the Bulldogs outscored Georgiana 13-11 and had a chance to cut the lead to a point as time expired in the third period.

After a quiet third quarter, Binion hit 5-of-6 free throws and two 3-pointers to put Brantley away.

“We played good defense at the end, and I told the guys that if we could hold them to one shot on a possession, we would win,” Norris said.

Binion was the leading scorer with 26 points, while Lee Curry scored 15 and Rich added 12.