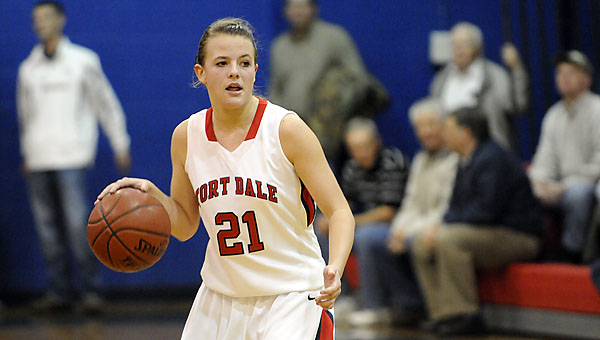 On Tuesday night, 90 percent proved to be good enough.

Matthews, who is battling an ankle injury, scored 15 points to help propel the Lady Eagles (2-3) to a 39-33 win against Macon-East Montgomery Academy. Matthews’ 15 points included a 3-pointer midway through the fourth period that gave Fort Dale the lead for good during a back-and-forth final period.

“Anne is still not 100 percent, but I thought she competed and helped us be a little more under control offensively,” Fort Dale head coach Reggie Mantooth said.

Matthews’ ankle injury forced her to sit out the Lady Eagles’ Nov. 28 loss to Lowndes Academy. In that contest, Fort Dale turned the ball over a season-high 41 times.

While Matthews could be seen grimacing and reaching for her ankle on several occasions during the second half, she remained on the court and was able to help the Lady Eagles break Macon-East’s full-court press, which led to a number of easy baskets. According to Mantooth, that proved to be the difference in the game.

“We were able to handle their pressure a little better in the second half,” Mantooth said.

Fort Dale guard Hannah Johnson, who was on the court for just four minutes, also provided a lift for the Lady Eagles off the bench. With the Lady Knights leading by two points, Johnson drilled a 3-pointer midway through the fourth period to give the Lady Eagles a 1-point lead.

After a Macon-East basket by Sarah Peacock, Matthews connected on her only 3-pointer of the night to help Fort Dale regain the lead for good.

Fort Dale will be back in action Friday when it plays host to Lee-Scott Academy. Junior varsity action is set to begin at 4 p.m. with varsity action to follow.