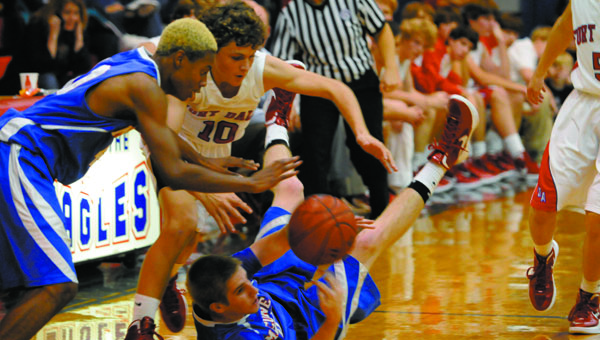 The loss is the first of the season for the Eagles (4-1).

“It was by far our worse game of the year both offensively and rebounding,” Fort Dale head coach Reggie Mantooth said. “Hopefully we can learn from this game and continue to get better.”

“(Because of their press) we turned it over early in the game, and they got a lot of baskets in transition where we didn’t get a chance to set our defense,” Mantooth said.

The combination for Fort Dale turnovers and easy transition baskets helped Macon-East build a 19-5 first-period lead. It was a hole Fort Dale was unable to battle its way out of. Still, Mantooth feels his team can build off the loss to the Knights (6-0).

“It was a tough loss, but I have confidence in our guys that they will work hard and continue to get better,” he said.

Fort Dale will be back in action Friday when it plays host to Lee-Scott Academy. Junior varsity action is set to begin at 4 p.m. with varsity action to follow.