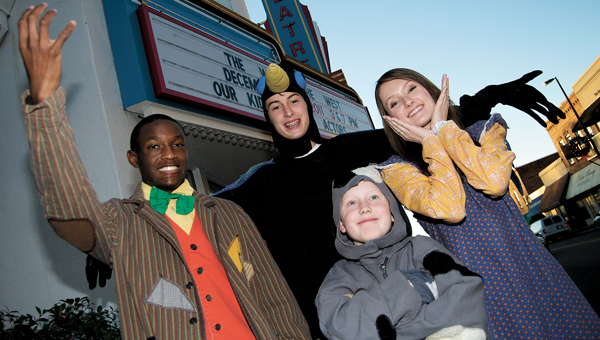 Brett Taylor (Tinhorn), Steiner Hamilton (Scare crow), Ian McClure (Mooch the dog) and Sierra Teate (Dotty) are among the local performers taking part in the Missoula Children’s Theatre production of “The Wiz of the West,” which will be performed at the Ritz Theater today at 3 p.m. and 7 p.m. (Advocate Staff / Ashley Vansant)

Roles have been picked, lines have been read and the lights are on stage at the Ritz Theater in Greenville as the Missoula Children’s Theater puts on its production of “The Wiz of the West.”

About 60 local children will be performing a western version of “The Wizard of Oz” Saturday, Dec. 3.

Sierra Teate, a sophomore at Fort Dale Academy, landed the lead role of Dotty, the western version of Dorothy.

“I play the girl that gets blown up in the twister and gets thrown out in the West, and I have to find my way back home with my dog Mooch instead of Toto,” Teate said.

The group auditioned on Monday and has been rehearsing each day from 4 p.m. to 8:30 p.m.

Nancy Idland, director of the Greenville Area Arts Council, said other students are excited to be in the play.

“Fort Dale student Lilah Ruth is a veteran actress and having lived in Montana has performed with the Missoula Children’s Theatre several times in the past,” Idland said. “She is thrilled that the GAAC has brought this company to Greenville and is loving every minute of the experience.”

“Brett was overjoyed to be chosen as Tinhorn,” Idland said. “Deago Martin, a fifth grader who attends High Ground Academy in his home, is excited to be performing as one of the Munch Kin. His mom is overjoyed at the opportunity for Deago and says he is having a wonderful experience.”

For Teate, she just loves being in theater.

“We don’t have a drama club, so I always jump on opportunity when I can because I love being on stage and acting, performing and singing.”

For the audition, approximately 80 young people lined up from shortest to tallest in a straight line. Two women from the Missoula Theater gave the children simple instructions. Each one had to say their name and age as if they were excited and mad to show their acting ability.

“It was a little intimidating at first, because it was these two ladies that we had never seen before and they weren’t from around here,” Teate said.

Each child had to read a line, sing part of “Row, Row, Row Your Boat” and perform a few small steps to show how quickly he or she could memorize lines and dance steps.

“After that, they moved some people around in the line and then picked (the cast) after 15 or 20 minutes and practices started right after,” Teate said. “It was pretty intense.”

Teate was shocked that she got the lead role and said it was a great moment.

“It was actually really surprising because I told my friends, ‘I don’t think I’m going to get anything but I’ll just do it just in case,’” Teate said. “Then I got the lead and I was just shocked. I thought maybe I should keep doing this and maybe it’s something that I can look into doing in the future.”

There will be two performances Saturday. The first at 3 p.m. and the finale at 7 p.m. Tickets are $10 for adults and $5 for students and they can be purchased at The Pineapple or at the door one hour before each performance.

“To say I am overjoyed with this intensive week is putting it mildly,” Idland said. “ I am thrilled to the moon and back that these kids have had this amazing opportunity.  They come into the Ritz each afternoon — after being at school all day — with smiles on their faces and excitement in their hearts. It is my hope that the Greenville Area Arts Council will be able to include another production from Missoula Children’s Theatre in future seasons.”