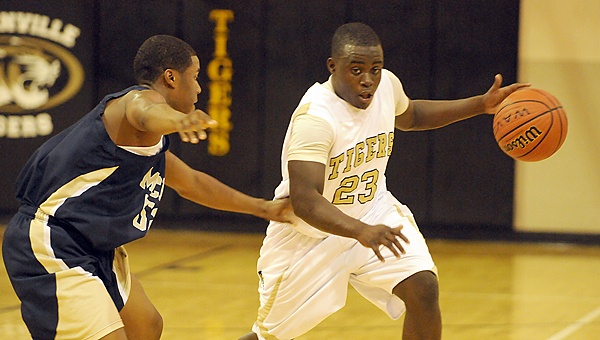 Greenville High School head coach Richard Kelly knew the GHS Thanksgiving Tournament would be a test for his squad.

And while the Tigers didn’t exactly pass with flying colors, the first-year head coach isn’t ready to give his team a failing mark either.

“We are getting better and better every game,” Kelly said. “The effort is there, we just have to master the offense and control the boards. We are a young team who has got to fight through this adversity. We’re still in November, but you see progress, and I see a team that has the potential to get a lot better.”

The Tigers (0-4) finished with three losses in the tournament, the last a 57-45 defeat at the hands of Booker T. Washington High School on Wednesday.

In the loss to the Eagles, senior forward Daryl Starks led the Tigers’ charge with 25 points and 8 rebounds.

“Right now Daryl is a substantial part of our offense,” Kelly said. “When finishes in the low post, he is hard to defend.”

On Tuesday, a late Greenville rally fell short as the Tigers dropped a 43-36 decision to Monroe County High School.

With 1:43 to play in the contest, the Tigers trimmed Monroe County’s lead to just two points, but a bevy of turnovers and missed free throws down the stretch sunk Greenville’s hope of notching its first win of the season.

“When we learn to eliminate turnovers, that is when our offense will start clicking,” Kelly said.

Starks once again led the Greenville scoring attack. He finished with a game-high 26 points and also snagged 8 rebounds.

Greenville will be back in action Tuesday when it travels to Troy to face Charles Henderson High School. The game is scheduled to begin at 7 p.m.