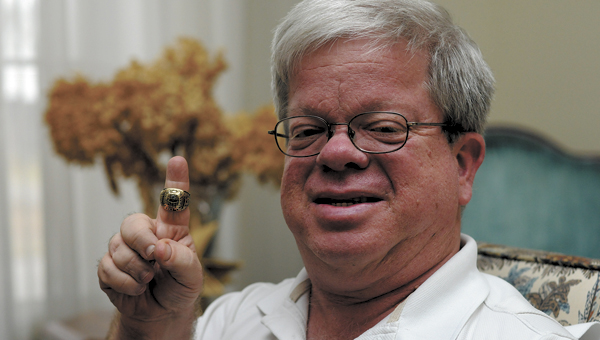 Colin MacGuire shows off his 1979 NCAA national championship ring. MacGuire served as a team manager for Alabama from 1978-79 and was on the sidelines for two Alabama Iron Bowl victories. (Advocate Staff/Ashley Vansant)

But every day since 1979, the Greenville native has worn a particular ring. While it’s not uncommon for a man to wear a ring, MacGuire’s ring is uncommon.

“There aren’t a lot of people walking around with one of these,” MacGuire said.

What makes MacGuire’s ring so special?

It’s a 1979 NCAA national championship ring from the University of Alabama. MacGuire served as a team manager for the Crimson Tide from 1978-79. As a student manager, MacGuire was on the sidelines for Alabama’s 34-16 and 25-18 Iron Bowl victories in 1978 and 1979, respectively.

“I was living a dream,” MacGuire said. “It was a great time in my life.”

“Everyone was in awe of him,” MacGuire said. “He made you nervous, but he didn’t try to. He just had a presence about him. He had a way of getting the best out of people.”

MacGuire said that was evident before the start of the 1978 Iron Bowl.

In all, MacGuire, who graduated from Alabama in 1980, has been on the sidelines or in the stands for 26 Iron Bowls, including some of the rivalries most famous games.

He witnessed the 1971 contest when both teams entered the game undefeated and playing for a chance at competing in the national championship game. The Crimson Tide went on to defeat Auburn and eventual Heisman Trophy winner Pat Sullivan 31-7.

MacGuire was also on hand for the 1984 game when Auburn standout Bo Jackson ran the wrong direction on a block and forced Brent Fullwood out of bounds helping the Crimson Tide secure a 17-15 win.

And then there was the kick.

MacGuire watched as Alabama kicker Van Tiffin booted a 52-yard field goal with no time remaining to lift Alabama to a 25-23 victory in 1985.

“I saw some great games,” MacGuire said. “The Iron Bowl is special.”

MacGuire won’t be in the stands for today’s game, but he’ll be watching the game on the television.

“I wouldn’t miss it,” MacGuire said.