Locals to participate in Iron Bowl 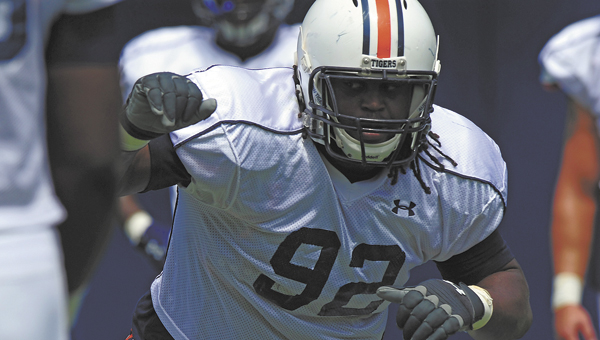 Former Greenville High School standout Kenneth Carter, a sophomore defensive tackle at Auburn, will be playing in his second Iron Bowl. This season, Carter has totaled 18 tackles, including one for a loss in helping Auburn to a 7-4 recording, including a 3-4 mark in Southeastern Conference play. (Photo Courtesy of Todd Van Emst)

All eyes will be on Auburn, Ala., Saturday when instate rivals Auburn and Alabama face off in the Iron Bowl.

The contest will be the 76th time the two teams have met on the gridiron, and the Camellia City will be well represented at Jordan Hare Stadium.

No doubt more than a few Greenville natives will be counted among the 87,451 fans in the stands for the game, but it’s unlikely that any will have a better view than former Greenville High School standout Kenneth Carter.

Carter, a sophomore at Auburn, is second on the Tigers’ depth chart at defensive tackle and will be playing in his second Iron Bowl.

As a freshman, Carter played in Auburn’s 28-27 win in Tuscaloosa, but did not record tackle.

The 6-foot-4, 290-pound sophomore has played in all 11 games for the 24th-ranked Tigers this season, and started the first eight games before giving way to Gabe Wright.

This season, Carter has totaled 18 tackles, including one for a loss in helping Auburn to a 7-4 recording, including a 3-4 mark in Southeastern Conference play.

But while Carter will undoubtedly have the best view, Caroline Dunklin’s view won’t be too bad either.

The Fort Dale graduate will be cheering on Carter and the Tigers from the sidelines as a member of Auburn’s cheerleading squad. Like Carter, Dunklin also took part in last season’s Iron Bowl.

Saturday’s game is schedule to kick off at 2:30 p.m. and will be broadcast on CBS. Auburn will also serve as the host for College Gameday prior to the start of the game. It is scheduled to air live from 9-11 a.m. on ESPN.