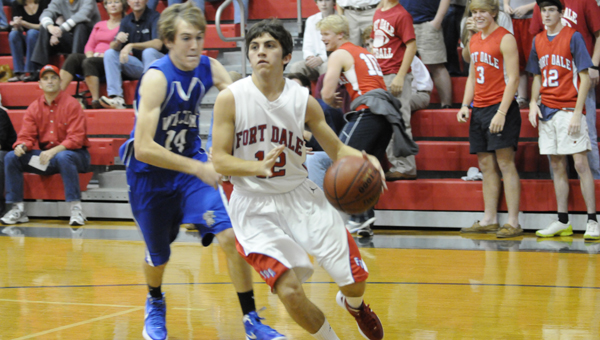 Fort Dale's Millo led the Eagles’ scoring attack Monday with 10 points on 3-of-15 shooting from the field and a 4-for-8 effort from the free-throw line. (Advocate Staff/Andy Brown)

Fort Dale Academy raced out to a 23-9 first-half lead over Wilcox Academy and then held off a late Wildcat charge to score a 44-30 victory in the Eagles’ season-opener Monday night.

“I thought we were ready to play,” he said. “I was more surprised that we missed some shots early in the first half that we usually make. I was really pleased with our defensive effort throughout the game.”

Fort Dale built a cushion early with a 7-0 run sparked by the play of Tyler Millo, who scored three points in the opening period and forced the Wildcats into three turnovers.

“Tyler has a lot of experience from last year and has worked hard in the offseason,” Mantooth said. “I really expect for him to have a good year for us and to be a leader on our team.”

Millo led the Eagles’ scoring attack Monday with 10 points on 3-of-15 shooting from the field and a 4-for-8 effort from the free-throw line.

Midway through the fourth period the Wildcats mounted a charge, outscoring Fort Dale 12-6 to cut the lead to single digits at 39-30.

With the lead dwindling, Mantooth called a timeout. Coming out of the timeout, Millo drove to the basket for a layup to push the lead back to 11 points. The Wildcats failed to score for the final 3:58 of the game.

“We were struggling to execute anything on offense, so we just set a play for Tyler to get a good look going to the basket,” Mantooth said.  “We had not run that play in practice so it was good to execute it in the game.”

Ten Eagles scored in the win. Taylor Windham and Wesley Scott chipped in 6 points each, while Matt Langford and Chip Taylor each tallied 5 points.

Tate Brand and Will Chapman each scored 11 points to lead the Wildcats.

Fort Dale will be back in action Monday when it travels to Lowndes Academy.

The game is scheduled to begin at 7 p.m.