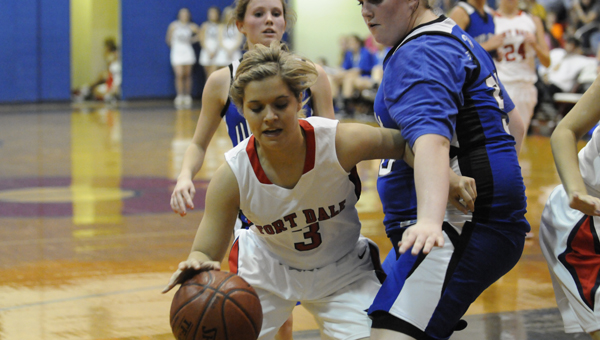 The Lady Wildcats controlled the game from start to finish, as Fort Dale managed to post just nine points in the game’s opening half, and shot just 18.4 percent from the field for the game.

“I think a lot of our offensive struggles were related to this being the first varsity game for a majority of our team,” Mantooth said. “The only returner we have with any varsity experience is Anne Matthews and I think it showed in our inability to score.”

The Lady Eagles (0-1) did a better job of keeping pace with Wilcox in the second half. Fort Dale scored 5 points in the third period to Wilcox’s 8 and 8 in the fourth period to the Lady Wildcats’ 10.

While Wilcox’s Rachel Bell, who led all scorers with 14 points, was able to push the ball up the court for easy baskets during the first half, Mantooth was pleased with Fort Dale’s half-court defense.

“I thought half court defensively we were pretty solid for the first game, but we still have a long way to go,” he said.

Fort Dale will be back in action Monday when it travels to Lowndes Academy.

The game is scheduled to begin at 6 p.m.