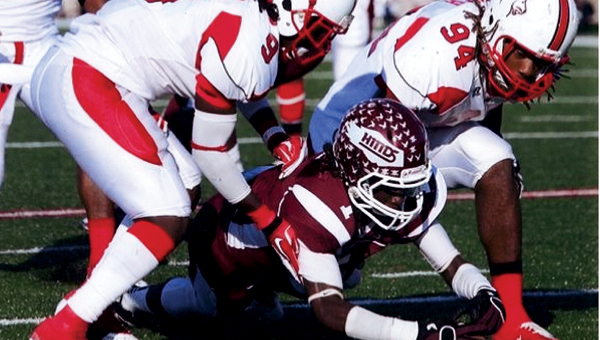 Greenville native Za’Darius Smith will be chasing a state championship on Saturday.

“We’re ready to get out there and play,” Smith said. “The hard part now is the waiting.”

While Smith is eager to play for a championship, this isn’t exactly a moment he’s been waiting for all his life.  For much of his life he dreamed of basketball championships. It wasn’t until his senior year at Greenville that he went out for football.

“When I came here I wasn’t really thinking about a championship. I had just played one season of football in my whole life, so I didn’t really have any idea what to expect,” Smith said. “Not really having played much football before, I was more nervous about the football part coming together for me personally.”

Things came together for Smith quickly.

In his freshman season, the 6-goot-6, 250-pound defensive lineman has recorded 12 tackles, three sacks and nine quarterback hurries, while helping the Lions to a No. 2 ranking in the National Junior College Athletic Association poll and their first-ever undefeated regular season.

Smith said he owes much of his success this season to former Greenville head coach Ben Blackmon.

“I was a basketball player who wanted to give football a shot, and Coach Blackmon gave me that chance,” he said. “He let me get out there and play. Without him I wouldn’t be here playing. I sure do appreciate him for what he did for me.”

Smith may not have known what to expect when he arrived on campus, but he now knows that expectations are high for the Lions. They are just one win shy of matching the school’s record for most wins in a season with 11. The last EMCC squad to do so, was the 2009 team. That group won a state championship.

A win Saturday would also give EMCC an automatic berth into the Mississippi Bowl, which will be hosted by Mississippi Gulf Coast at Biloxi Indians Stadium on Dec. 4 in Biloxi.

“Everyone is excited,” Smith said. “To finish undefeated and win a state championship would be a great accomplishment.”

Kickoff for the Lions matchup with Gulf Coast is scheduled for 2 p.m. at EMCC’s New Sullivan-Windham Field.