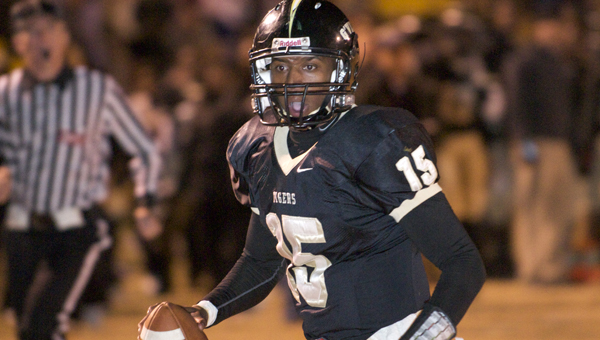 Greenville quarterback Kent Riley scored on runs of 50, 8, 71 and 24 yards in the Tigers' 57-25 win Friday against Tallassee in the first round of the AHSAA playoffs. (Advocate Staff/Ashley Vansant)

Then the second quarter started.

A 27-point second quarter helped propel Greenville (11-0) to a 57-25 win in its first round showdown with Tallassee.

“Coach got after us,” said Greenville senior defensive back Jerome Cook, who returned two interceptions for touchdowns in the win. “He told us to play like we were taught to play.”

Apparently the Tigers got the message.

After surrendering 13 points to Tallassee in the game’s first three minutes, the Tigers didn’t yield another point until the 4:59 mark of the third quarter. By that time, Greenville head coach Earnest Hill had pulled most of his starters from the game.

Despite scoring a season-high 57 points, the Tigers struggled at times Friday night.

Greenville quarterback Kent Riley, who scored on runs of 50, 8, 71 and 24 yards in the first half, threw an early interception that set up a 64-yard touchdown run by Tallassee’s Herman McKenzie that gave his squad a 13-7 lead.

The Tigers also saw a promising drive end in a punt after racking up three holding penalties and a false start.

While the Greenville offense took a while to warm up, the Tiger defense was able to provide a spark early.

Cook snagged his first interception less than a minute into the game and then raced 43 yards for a score. He duplicated the feat on the first play of the second quarter, this time returning it 25 yards for a touchdown.

“I got a good read on their No. 2 receiver and just made a play on the ball,” Cook said. “At the time that was big for us because it shifted the momentum to our side.”

The defense, which forced seven turnovers, also had its share of difficulties.

“We weren’t as focused as we needed to be,” Hill said. “We’ve got to be more focused next week.”

Greenville will face Vigor next Friday at 7 p.m.