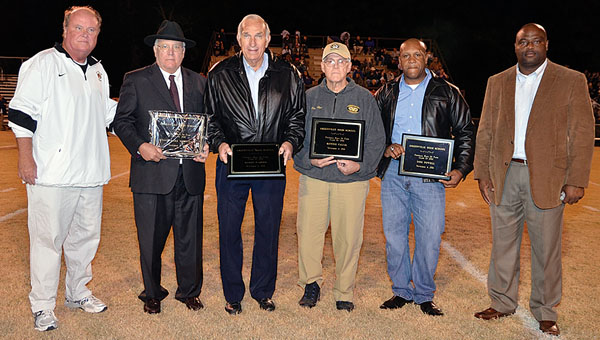 The Greenville native played for a man he considers to be one of the state’s “great coaches” in legendary Greenville High School coach Luke Whetstone.

He grew up watching another Greenville great from the stands in Bobby Wasden, and he had a sideline view of one of Greenville’s most electrifying players in Tom Powell. On Friday, Faulk, who happened to be a pretty good player and coach in his own right, was inducted into the Greenville High School Hall of Fame alongside Whetstone, Wasden and Powell.

“I’m the luckiest of all four,” Faulk said. “I had the chance to play for a great coach. I grew up watching and looking up to (Wasden) and I was lucky enough to be around when Tom Powell was playing here at Greenville. I still think he’s probably the best pure athlete to ever play at Greenville High School. I’m the one who got to see all these guys. That makes me pretty lucky.”

Faulk has been a part of Greenville High School football for a quarter of a century, first as a player and later as an assistant coach.

During his playing days, Faulk rushed for 1,095 yards and 16 touchdowns as a senior, breaking the 1,000-yard barrier on his final run as Tiger when he broke free for a 98-yard touchdown run. That season, he was named the team’s co-MVP and earned all-state honors.

“If you cut me, I might bleed a little red, but most of it will be black and gold,” Faulk said.

Wasden was a standout player as well before beginning a coaching career that included winning five state championships.

Like Faulk, Wasden played for Whetstone – a man he called “the best high school coach in the state of Alabama.”

While playing at Greenville, Wasden, who Whetstone called “the best blocking back he ever coached,” led the Tigers to an unbeaten finish in 1955 when he rushed for 832 yards and 12 touchdowns. For his efforts he was named to the All-South Alabama Conference team and was named to the all-state team.

“I had a lot of good teammates,” Wasden said.

Wasden later went on to play for Auburn.

Like Faulk and Wasden, Powell starred in the Tiger backfield and later made his way to the Plains.

While at Greenville, Powell became the first Tiger to put together back-to-back 1,000-yard rushing seasons. In 1981, he averaged 9.42 yards per carry en route to rushing for 1,639 yards and 20 touchdowns. It took Powell just seven games to break the 1,000-yard mark.

“The way I see it, I didn’t get this by myself,” Powell said. “I got this because of all my teammates, coaches, family members, fans and everyone else that helped push me. This is not about me. It’s about us.”

He also left his mark on the college football landscape. Twenty-four of his players went on to sign football scholarships, including seven who signed with SEC programs.