Tigers not looking past Tallassee 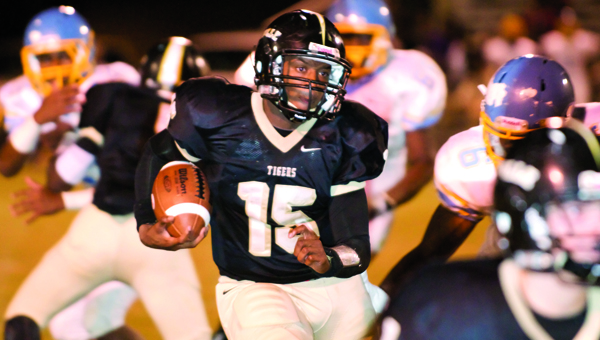 Greenville High School head coach Earnest Hill’s message to his team in the days leading up to their first-round showdown with Tallassee High School has been simple.

The Tigers enter Friday night’s contest as a No. 1 seed. Tallassee is a No. 4 seed. That’s reason for concern for Greenville’s first-year head coach.

“I’ve been telling them that every year from (Class) 1A to (Class) 6A a No. 1 seed loses to a No. 4 because they overlooked them,” Hill said. “As a coach you try and make sure that your team doesn’t look past anyone, but it can happen to anyone. I just hope it doesn’t happen to Greenville High School.”

On paper, Greenville is a clear favorite.

The Tigers posted a perfect regular season following a forfeit by Wetumpka, cruised to a region championship and have outscored their opponents 279-140 this season. Tallassee finished its regular season campaign with 4-6 record and has been outscored by its opponents 269-188.

But games aren’t played on paper.

“We’ve watched film on Tallassee, and they have a couple of kids that can make plays,” Hill said. “They have an athletic quarterback and a pretty good running back, but I feel like if we show up and play the way we are capable of playing, we should be fine.”

Hill said Tallassee, which will line up in a number of formations on offense, reminds him of Brookwood – a team the Tigers beat 14-0.

“They have the players to do some things on offense, and they have a really scrappy defense,” Hill said. “They run to the ball well. But I’m not really worried about Tallassee. I’m more worried about Greenville. We have to come out and take care of business or Tallassee could be that four seed that upsets a one.”

Greenville and Tallassee will face off at 7 p.m. Friday at Tiger Stadium.