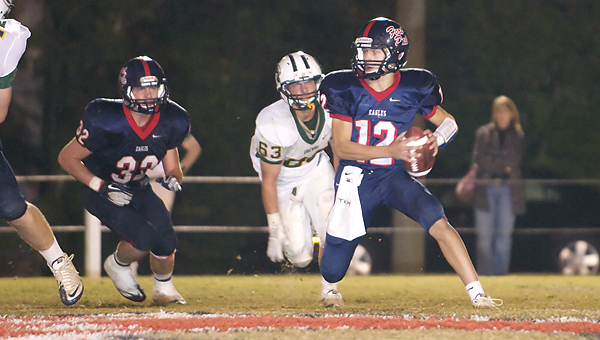 “That is a very good football team,” Fort Dale head coach James “Speed” Sampley said. “There’s a reason their No. 1.”

The loss was the third in a row for the Eagles (4-6) and marked the first time in nine years the team has dropped three consecutive games.

Fort Dale made a game of it early.

After yielding touchdowns on two of the Wildcats’ first three drives, the Eagles held the Wildcats scoreless for the remainder of the first half. In the meantime, Fort Dale managed to put 10 points on the scoreboard.

Junior kicker Patrick Russell knocked home a 36-yard field goal to give the Eagles their first points of the contest and senior running back Perry Singleton barreled into the end zone from 4 yards to slice the Edgewood lead to 14-10.

“I think that’s the hardest we have played in a long time,” Sampley said. “We played hard for four quarters and our kids didn’t give up, but there are still things we have got to do better if we’re going to be successful.”

One of those things, according to Sampley, is limiting the number of “big plays” his team surrenders.

The Wildcats had 14 pass plays that went for at least 15 yards and 10 that covered 20 or more yards.

“They throw it better than anyone in the association,” Sampley said. “They have for a long time. They didn’t really hurt us with the run, but we gave up too many big plays in the passing game.”

The Eagle defense held the Wildcats to just 37 yards on the ground.

Fort Dale gained 122 yards on the ground, led by Singleton’s 59 yards on 20 carries.

The Eagles gained 104 yards through the air with sophomore quarterback Chip Taylor completing 8-of-11 attempts for 77 yards. Senior Cody Tesmer passed for 27 yards.

The Eagles will travel to Bessemer next Friday for a first-round playoff showdown with Bessemer Academy.

“You’d like to go into the playoffs coming off a win, but we can build off this,” Sampley said. “We’re just going to have to go up there and make something happen. This is the time in the season when you’re playing to keep your season alive.”