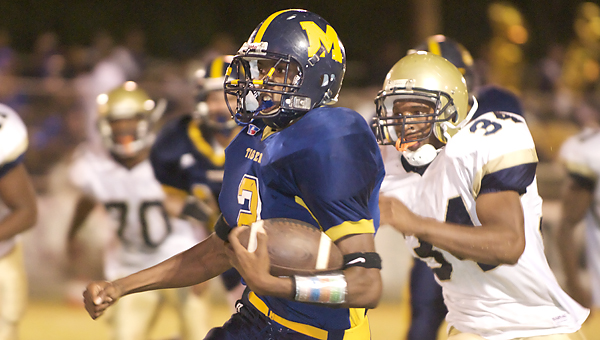 The Tigers (5-4) dropped a 36-28 decision to Monroe County High School in McKenzie. It was the first win of the season for Monroe County and McKenzie’s first loss at home this season.

“I’m really proud the way the seniors came out this year,” McKenzie head coach Miles Brown said. “We had a big senior class last year that graduated. Everybody thought this would be a tremendous down year and it ended up not being. We had a winning season.”

The tone was set for McKenzie when they fumbled the ball on the opening kickoff with Monroe County recovering the ball on McKenzie’s 25-yardline. Monroe County was able to run it in for a touchdown to take an early of 8-0 lead in the game’s opening quarter.

Late in the first quarter, McKenzie’s Rakeem Ball was able to pick up 42 yards and get down to Monroe County’s one-yard line allowing McKenzie to score making it 8-6.

After a failed on-side kick by McKenzie, Monroe had an eight-play drive scoring with just one minute left in the first quarter to go up16-6.

It didn’t take long for McKenzie to fight back when quarterback Sir Wallace Presley connected with Ball for a 29-yard pass getting down to Monroe County’s 25-yardline.

After the Tigers were pushed back 10 yards, Presley was able to take off on a 35-yard run to score a touchdown closing the gap to 16-14 early in the second quarter.

But Monroe County answered when senior Alexander Crawford ran it in for a touchdown and a 22-14 lead.

Thirty seconds before the half and after several Monroe County penalties, McKenzie was able to move down the field with the help of Presley connecting with Ball again for 30 yards tying the game 22-22 at the half.

It was a fight to finish line for the two teams as the second half progressed with strong defense and big plays. Monroe County had the first big play when Crawford sprang free for 39 yards to lead Monroe to a touchdown taking the lead 28-22 late in the third quarter.

McKenzie soon tied the game in the fourth quarter but Monroe County was able to move the ball down the field once again scoring for the final time making the score 36-28.

“I think our seniors did a great job leading these underclassmen in everything,” Brown said.