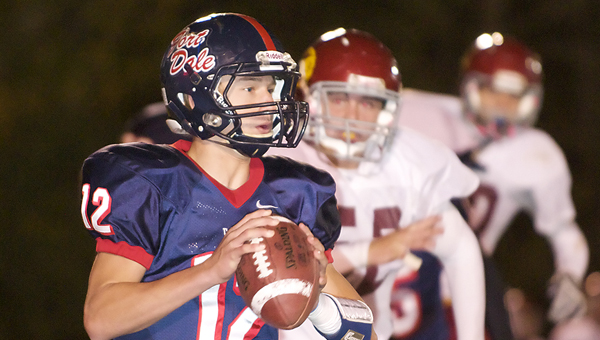 The Eagles came up a half a yard short to be exact.

Following a 30-yard touchdown strike from quarterback Cody Tesmer to wide receiver Ryan Salter with 1:06 to play, coupled with a pair of Escambia Academy penalties, the Eagles needed to pick up just half a yard for the two-point conversion to tie the game at 32-all.

Instead, Escambia’s Jalon Henry yanked down Fort Dale running back Perry Singleton for a loss and sealed a 32-30 win.

“We had our chances there at the end of the game,” Fort Dale head coach James “Speed” Sampley said. “We only needed half a yard and we couldn’t get it. Right now we’re our own worst enemy. We’re not blocking and tackling better than our opponent and until we do that we aren’t going to win games.”

Despite being outplayed by the Cougars for much of the game, the Eagles had their chances at the end thanks to two quick scoring drives and a successful onside kick inside the final three minutes to play.

“We just made too many mistakes,” Sampley said. “Our guys didn’t quit. We could have laid down, but we didn’t. We played until the end, but just we’re able to get it done.”

Singleton scored three touchdowns to lead the Eagles’ charge. The senior scored on runs of 2, 6 and 2 yards. He finished with 134 yards on 25 carries.

Patrick Russell booted a 32-yard field goal for the Eagles.

Tesmer led the ground attack with 142 yards on 18 carries. Tesmer also threw for 82 yards and a score.

The Eagles finished with 441 yards of offense.

Fort Dale will be back in action Thursday when it plays host to Edgewood Academy.