Bulldogs too much for Tigers 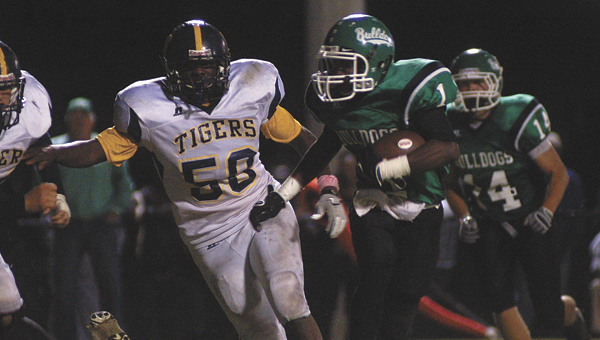 No. 3 Brantley High School jumped out to an early lead and didn’t look back on its way to a 48-6 win over region rival McKenzie School on Friday night.

The Bulldogs earned touchdown runs from Andrew Lowery, Reed Kilcrease, Zach Wiley and Chester Person in the first half to take a 28-0 lead into halftime, but the Tigers showed signs of life in the second half.

McKenzie’s Octavius Mobley intercepted a tipped pass at the line of scrimmage on Brantley’s first possession of the second half, and it didn’t take the Tigers long to capitalize.

Sir Wallace Presley connected with Nicarius Peterson on a 45-yard pass to the Brantley three-yard line, and Presley punched it in a play later to cut the score to 28-6.

Down 35-6, the Tigers threatened again late in the third quarter.

McKenzie faced fourth down and 13 when Matt Lewis broke a run of more than 20 yards to the Brantley 9-yard line.

However, the drive stalled and ended when a pass on fourth-and-goal fell incomplete.

The Bulldogs added two more touchdowns in the fourth quarter to make the final score 48-6.

“We came out at halftime and played some good football in the second half.”