Watts, Robinette to be inducted to HOF 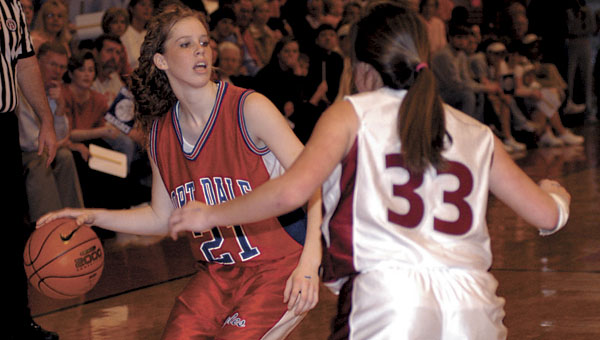 Frances Watts, a 2006 graduate of Fort Dale Academy and a member of the 2004 Class AAA state champion basketball team, will be inducted into the FDA Hall of Fame Friday night. (File Photo)

Since 1997, Fort Dale Academy has rewarded outstanding athletic accomplishment by inducting coaches and players into the school’s Hall of Fame.

On Friday, the school will induct its newest members.

The Class of 2011 includes Frances Watts and Chris Robinette.

Watts, a 2006 graduate of Fort Dale, was a member of the 2004 Class AAA state champion  basketball team.

“The Fort Dale Academy Hall of Fame is very special to me,” Watts said. “I have admired the inductees over the years, especially my older brother Marshall. To join a group of athletes that have been leaders on the athletic field at my school is a great honor and I am very excited and touched.”

“I think it’s a great honor and very well deserved,” Mantooth said. “She’s one of the best basketball players that we had at Fort Dale. I think it’s a big honor any time you get inducted into this. I’m sure she’s exited and honored to be inducted.”

Many of the lessons Mantooth taught Watts in high school have rolled over into her life today.

“Basketball taught me many lessons about life that I rely on,” Watts said. “Coach Mantooth helped me understand that hard work, commitment and team effort lead to success. All three of these traits guided me on the basketball court and still play an important role in my life.”

Robinette coached his way into the Hall of Fame by guiding the Eagles to the state championship in basketball in 1993.

“To me, it’s a really good honor,” Robinette said. “I had more fun coaching at Fort Dale than the whole time I played at Alabama. There’s good people, good kids and good life-long friends. It’s a great honor, and it’s a place that had such an important influence in my life to come back and be recognized.”

Jimmy Gardner, a longtime friend of Robinette’s, said he is very glad the coach is being inducted.

“He did stay here for two years, and one of those two years won a championship in basketball,” Gardner said. “I think the truth, like lots of folks, is that he would have rather been coaching all of this life. He’s always going back to his ties of when he was here and that’s his true love.”

By taking what he learned as a coach at Fort Dale, he has applied those same lessons throughout his life.

“The first day I was at Fort Dale, coach Autrey said ‘Why don’t you go down and paint those goal posts,’ and I remember standing on Jim Autrey’s truck and painting the goal post, and I was thinking, ‘What have I done?’ As I painted the goal post, it taught me, if you wanted to be at Fort Dale, you did it all: painted, cut the grass, coach and mentor. You did everything. You have to do what it takes to be successful and not pick and choose what you do.”

Robinette and Watts will be inducted Friday at Fort Dale’s homecoming game.