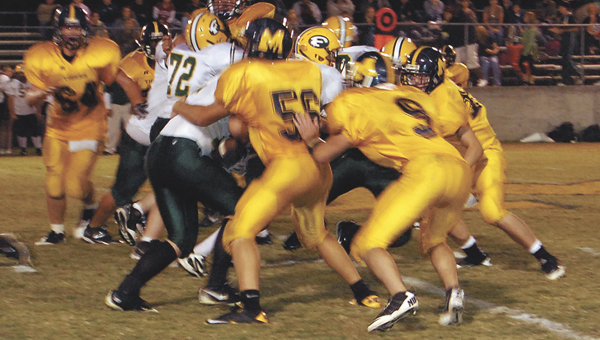 “I was proud of the way our kids came out tonight and played with a lot of intensity and emotion,” McKenzie head coach Miles Brown said. “Our guys love playing in our own stadium just like any football team. It’s good to get a win for these seniors on their last homecoming.”

The Tigers started off strong storming down the field scoring in just four plays to take a quick 8-0 lead following a successful two-point conversion.

The Tiger defense was in full force stopping Florala before the McKenzie offense added a second touchdown with about five minutes left in the first quarter.

After a failed fourth-and-one attempt by the Wildcats, it seemed there was no stopping the Tigers. With nine minutes left in the half, the Tigers opened the gap making it 20-0.

However, with a change of possession, the Wildcats gained some steam and scored on a six-minute, 12-play drive to trim the Tigers’ lead to 20-7.

“We played good, but we have to work on defense,” McKenzie quarterback Sir Wallace Presley said.

Early in the second half, the Wildcats scored again closing the gap to 20-14.

McKenzie’s Ty Adams added a score to give Tigers some breathing room and a 26-14 lead.

Florala lost momentum when McKenzie recovered a fumble and Presley scored a touchdown making it 34-14.

Within four minutes, with the help of a successful onside kick, Florala was able to score two touchdowns making it 34-28 closing in on McKenzie in the fourth quarter.

“We made some adjustments here in the week trying to right some wrongs,” Brown said.

McKenzie will be facing Brantley High School next Friday night.

“Last year, we beat Brantley for the first time in a long time,” Brown said. “They’ll be sitting there waiting on us. We have a young team, but I feel confident in our team right now.”

Kickoff is scheduled for 7 p.m.