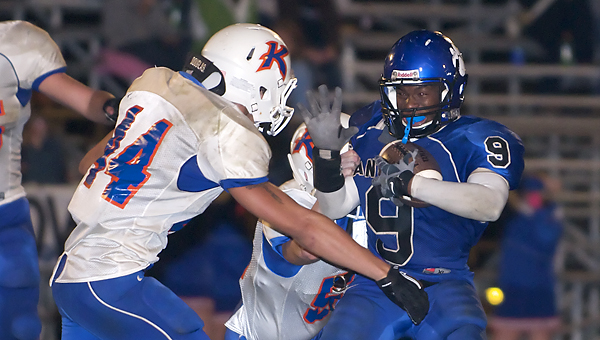 The Panthers trailed 30-6 heading into the game’s final 12 minutes, but managed to close the gap to 10 points thanks to a pair of touchdown receptions by senior tight end Adrian Rich.

Rich’s first touchdown grab came with 10:27 to play in the fourth quarter when the 6-foot-3, 205-pounder went up between two defenders to haul in a 14-yard pass from senior Rickey Everett, who would later add the two-point conversion.

On the ensuing Kinston drive, the Panthers forced a fumble, which Everett pounced on at the Georgiana 23-yard line. With 8:33 to play in the quarter, Everett fired a strike to Rich who then raced 77 yards down the right sideline for the score.

“We finally got a little something going on offense in the second half,” Georgiana head coach David Watts said. “We made some adjustments at halftime, and played a lot better.”

After forcing a second Kinston fumble with 7:43 to play that was recovered by junior linebacker Carlo Mitchell, and getting a 32-yard gain from Everett on second down, the Panthers’ drive and hopes of a comeback ended with an interception in the end zone. Kinston marched down the field and iced the win with a Patrick Smith touchdown that came with four seconds to play.

“If we had played the first half the way we played the second half, we’d have probably won the game,” Watts said.

Watts credited his defense with giving the Panthers a chance in the games’ final minutes. After yielding touchdowns on Kinston’s first two possessions, Georgiana’s defensive unit held the Bulldogs on downs inside the Panther 15-yard line on three occasions.

“Our defense kept it from being a blowout in the first half,” Watts said. “Those were three huge stands. We’re obviously disappointed with the final result, but there were some positives we can take away from this, and we’ll build on it.”

Georgiana eighth grader Jacquez Payton scored the Panthers’ lone first quarter touchdown on the game’s opening play from scrimmage after scooping up a bobbled snap and scampering 48 yards for the score.

For Kinston, the win marks the second over a Butler County team in as many weeks. The Bulldogs edged McKenzie 38-36 in overtime last week.