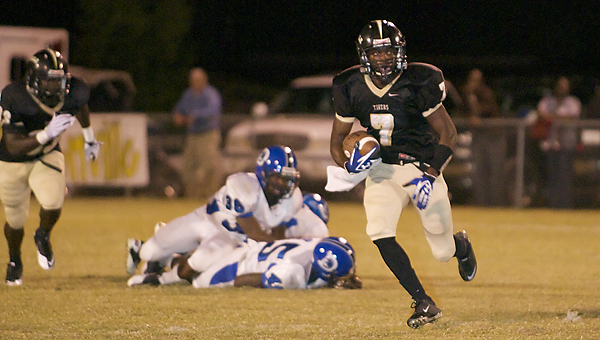 Greenville senior running back Jamall Hamilton scored on runs of 6 and 84 yards to help power the Tigers to a 30-14 win against Demopolis High School Friday night at Tiger Stadium. (Advocate Staff/Ashley Vansant)

Greenville High School scored 16 unanswered points in the second half to claim a 30-14 win against Demopolis High School Friday night at Tiger Stadium.

With the win, Greenville moved into sole possession of first place in Class 5A, Region 3 and is just one win shy of claiming the region crown in head coach Earnest Hill’s first season.

Early on in Friday’s contest, it looked to be anyone’s game. The turning point didn’t come on a crushing tackle or long pass. It came in the home locker room.

Hamilton, who scored on runs of 6 and 84 yards and set up two more scores with long returns, and the Tigers got the message.

“We’ve got to learn to play in the first half,” Hill said. “After our halftime talk we came out and did exactly what we worked on. That was a heck of a job.”

Demopolis (4-4, 4-1 Class 5A, Region 3) took the early lead when sophomore running back Demetrius Kemp plunged into the end zone from 3 yards out to cap a nine-play drive that covered 96 yards. Senior Mitch McPherson added the extra point for a 7-0 lead.

Greenville responded on its first play from scrimmage when junior quarterback Kent Riley spun out of tackle near midfield and then raced down the left sideline for a 69-yard score. Junior Ozell Carter’s extra point tied the game at 7.

A 27-yard scoring strike from sophomore quarterback Tyler Oates to senior wide receiver Logan Holley gave Demopolis the lead with 1:46 remaining in the half. However, it was short lived. A 52-yard return by Hamilton gave Greenville the ball at the Demopolis 28-yard line. Five plays later, Riley ran it in from 6 yards out for a score. Carter’s extra point tied the game at 14.

A botched snap by Demopolis midway through the third quarter that sailed over Stephen Stewart’s head and through the end zone gave Greenville a 16-14 lead. It’s a lead the Tigers never relinquished.

Hamilton’s touchdown runs with 5:16 remaining in the third quarter and 10:32 left in the fourth quarter sealed the win for Greenville.

“All that work in the summer that we called fourth quarter, it paid off tonight,” Hill said. “We played hard in the fourth quarter.”

Greenville (6-1, 5-0 Class 5A, Region 3) will be back in action Friday when it plays host to Selma High School. Kickoff is scheduled for 7 p.m.