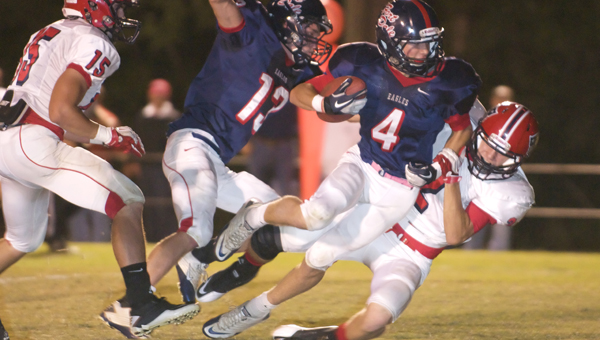 Fort Dale Academy clinched its spot in the playoffs with a 36–22 win over Pike Liberal Arts School Friday night in Greenville.

Pike Liberal Arts jumped out to an early lead with an 80-yard touchdown on its first play of the game making to go up 7-0.

Fort Dale gained some steam after holding the Patriots’ offense scoreless for the remainder of the first quarter and knotted the game 7-all when sophomore quarterback Chip Taylor found junior wide receiver Ryan Salter for a score.

The Patriot’s fumbled near their end zone allowing Fort Dale to take over on the 3-yard line. However, the Eagles fumbled leading to a safety and giving the Patriots a 9-7 lead.

Fort Dale shook off the two points when running back Perry Singleton ran in for a touchdown making it 13-9. With five seconds left in the half, Fort Dale was able to score a field goal to extend the lead to 16-9.

The Patriots started with the ball in the second half, but after an interception by Singleton, Fort Dale once again found its way into the end zone for a 23-9 lead.

The Patriot’s scored a touchdown late in the third quarter making it 23-16. On third-and-36 Fort Dale was able to open the gap by scoring a touchdown when senior Cody Tesmer connected Salter to boost the Fort Dale lead to 30-16.

Pike Liberal Arts then scored on a 15-play drive to draw to within one score. With three minutes left in the game, the Patriots had the ball and went for it on fourth down but were unable to convert. Fort Dale took over and sealed the win when Taylor found wide receiver Mason Stinson for a 56-yard touchdown.

“Pike has a really good program, and they played hard to the end,” Fort Dale head coach James Sampley said. “It was a win that we really needed. That assures us a playoff berth. We got three weeks of season to try and get better and that’s what we have to do.”

Taylor was 9-for-18 for 245 yards. Salter led the receiving corps with six catches for 145 yards. Linebacker Chase Whiddon had 17 tackles and Stinson has 12 tackles and two fumble recoveries to lead the Eagle defense. Tesmer, Salter and Singleton each had an interception.