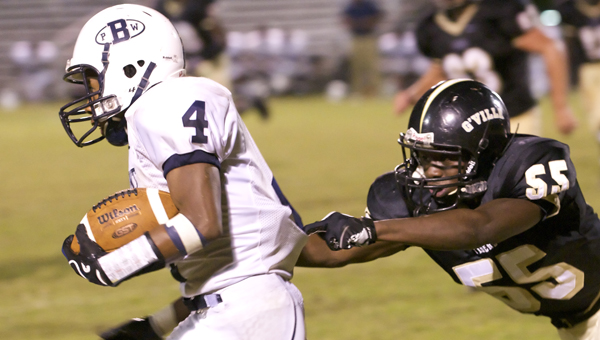 Greenville linebacker Parrish Patton and the Tiger defense will be tested Friday night when they host region-rival Demopolis.

It’s also one that Greenville High School head coach Earnest Hill has built his team around.

“I’m a defensive guy. Defense is our focus,” the first-year head coach said.

That focus will be tested Friday night when Greenville squares off against Class 5A, Region 3 rival Demopolis High School.

Both Greenville and Demopolis enter the contest with perfect 4-0 marks in region play, but the teams have reached that point in very different ways.

“They have a real good offense,” Hill said. “They’re explosive. They have the playmakers to put a lot of points on the board. It’s going to be a good test for us.”

Demopolis, the 2009 Class 5A state champion, will run the triple option, an attack Greenville is unaccustomed to seeing.

“It concerns me a lot,” Hill said. “It’s a tough offense to defend. You can do the right thing eight times in a row, and then make a mistake on the ninth time and it’s a score. Against an offense like Demopolis, you can’t let up on even one play. We’ve got to play with discipline. Everyone has to do his job on every play.”

Hill said his team’s goal this week is to hold Demopolis to 17 or fewer points.

“In the past a lot of the games (with Demopolis) have been high scoring. We want to stay away from that. I feel like if we can keep them around 17 points, we’ll have a good chance to win,” Hill said.

While Friday night’s game is a regular season showdown, it won’t feel that. The winner will take over sole possession of first place in the region.

“This game isn’t going to make or break our season, but a win would put us in the driver’s seat as far as winning a region championship,” Hill said. ”It’s a big game. It’ll be a playoff atmosphere Friday night.”

Kickoff is scheduled for 7 p.m. at Tiger Stadium.