Past champions face off Friday 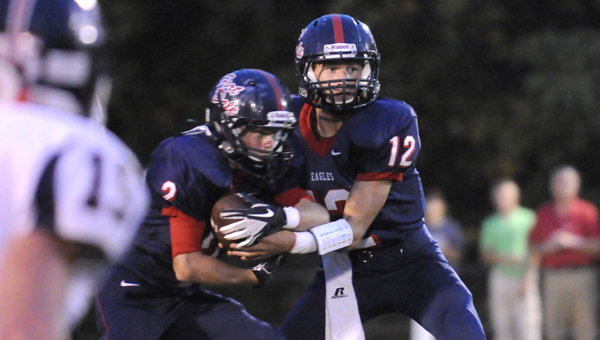 Running back Nick McLaughlin, who has already eclipsed the 1,000-yard mark this season, accounted for 168 of the Patriots’ 20 yards. McLaughlin carried the ball 34 times and scored once on a 2-yard run.

Georgiana School and Pleasant Home High School will both look to get back on track Friday night when the teams face off in Andalusia.

The Panthers are looking to rebound from a 38-8 loss to in-county rival McKenzie School, while the Eagles are hoping to erase the memory of a 49-7 loss to region power Brantley High School.

The Eagles (4-2, 3-1 Class 1A, Region 2) avoided the shutout when quarterback Hunter Weaver ran for a score in the fourth quarter.

Pleasant Home can clinch home field in the first round of the playoffs with wins against Georgiana and Geneva County.

McKenzie School will look to extend its winning streak to four games when it travels to Kinston Friday night to take on Kinston High School.

The Tigers enter Friday night’s contest on the strength of a 38-8 victory against in-county rival Georgiana School.

Kinston (0-6, 0-3 Class 1A, Region 2) has failed to notch a victory this season. The Bulldogs latest loss was a heartbreaking 9-8 loss to Geneva County Sept. 30.