McKenzie makes it four in a row 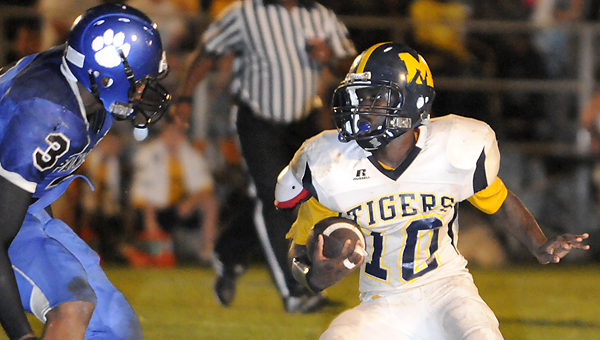 The Tigers have now won four in a row against Georgiana, which owns a 26-16 edge in the series.

“This is a big win for our kids,” McKenzie head coach Miles Brown said. “When two schools are as close as eight miles, you’re going to have a pretty good rivalry and you always want to win a rivalry game. I’m just proud of the way our kids played tonight. Our young guys stepped up and our older guys did a good job leading.”

Brown and the Tigers set the tone early with a dominating ground attack. McKenzie rushed the ball 52 times, while passing it just five times. Three of the Tigers’ five scores came as a result of a running play.

“We wanted to send a message to our kids,” Brown said of the play calling. “We wanted our guys to be confident in our offensive system and we felt like that was the way to do it.”

Late in the second quarter the Tigers handed the ball off to junior wide receiver Matt Lewis on an end around on four consecutive plays, which gained a total of 37 yards.

“They did a good job, and I did a bad job. That’s it,” Georgiana head coach David Watts said. 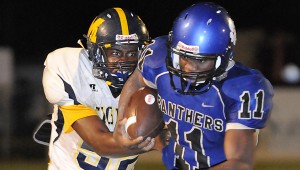 The Tigers staked claim to the early lead when running back Ty Adams barreled into the end zone from three yards out at the 2:34 mark of the first quarter. Quarterback Sir Wallace Presley added the two-point conversion and the Tigers led 8-0.

Georgiana quickly responded with a 10-play scoring drive that covered 44 yards and ended with a 6-yard pass from backup quarterback Jacquez Payton found tight end Adrian Rich in the corner of the end zone. Quarterback Rickey Everett added the two-point conversion to knot the game 8-all.

But it was all McKenzie from that point on. Wide receiver Rakeem Ball and Adams each added touchdowns inside the last five minutes of the second half. Terrance Clemons and Presley added the two-point conversions to help boost the Tigers’ lead to 24-8 heading into the intermission.

After a scoreless third quarter, McKenzie recovered a fumble in the end zone for a score. The Tigers capped the scoring with a 10-yard strike from Presley to wide receiver Nicarius Peterson with 1:11 to play.

McKenzie will be back in action Oct. 7 when it travels to Kinston.

Georgiana will also be back in action on Oct. 7. The Panthers will travel to Pleasant Home. Kickoff for both games is set for 7 p.m.