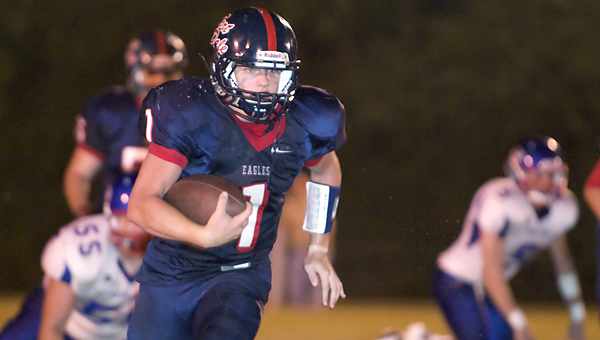 Fort Dale Academy senior quarterback Cody Tesmer threw for two touchdowns and rushed for another to help power the Eagles to a 31-6 win against Macon-East Montgomery Academy Friday night in Greenville.

Tesmer, who rushed for 106 yards on 17 carries and completed 5-of-11 pass attempts for another 69 yards, started in place of sophomore quarterback Chip Taylor who was sidelined after being knocked unconscious in last week’s loss to Hooper Academy.

“We told Cody all week that it was on him,” Fort Dale head coach James “Speed” Sampley said. “He came out and played a good game for us, and he did what we asked him to do.”

Sampley said the key to the Eagles’ win was the squad’s physical play.

“We were a lot more physical, and when we’re physical we give ourselves a chance to win,” he said. “When we’re not, we end up with a result like we had last week. I was proud of the guys’ effort tonight.”

Fort Dale jumped out to an early lead when Tesmer connected with junior wide receiver Ryan Salter for a 37-yard touchdown just 2:39 seconds into the contest. Junior kicker Patrick Russell booted the extra point to give the Eagles a 7-0 win.

A 1-yard scoring run by Tesmer and a 9-yard scorings strike from Tesmer to senior tight end Charlie Scofield and a pair of extra points by Russell extended Fort Dale’s lead to 21-0. Russell capped the first-half scoring with a 26-yard field goal with six seconds remaining in the half to give the Eagles a 24-0 lead.

“We moved the ball a lot better on offense,” Sampley said. “We didn’t move it quite as well in the second half, which is concerning, but we did do a better job of taking the ball down the field and scoring. We’ve still got a lot of work to do, but it was better.”

The Eagle offense failed to put the ball in the end zone in the second half, but Fort Dale junior defensive back Taylor Windham found his way into the end zone after picking off a Gage Pregno pass and racing 29 yards for the score. It was the second interception of the night for Windham.

The Knights’ lone score came on a 26-yard touchdown pass from Pregno to Traywick Dickson.

Fort Dale (3-2) will be back in action Friday when it travels to face Monroe Academy. Kickoff is set for 7 p.m.